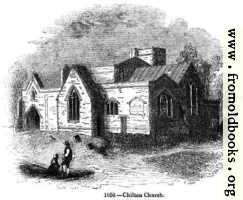 
An American visited and took some pictures of this clearly very photogenic village. The church itself was extensively renovated starting in 1847, and looks very different in the photographs! [more...] [$]


“Among the more important churches erected in the period of which we treat, that of Newcastle-Upon-Tyne holds an honourable place (Fig. 1052). It crowns a bold eminence, and forms from every point of view the cihef ornament of the town. The founder was St. Osmund, Bishop of Salisbury; the time, the reign of William Rufus. Henry I. gve the church to the canons of Carlisle. It was burned in 1216, and rebuilt, as supposed, about 1359. The most remarkable [...] [more...] [$] 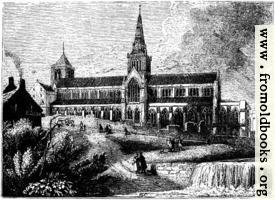 
“As St. Patrick’s Cathedral is the chief specimen of Gothic architecture in Ireland, so is Glasgow Cathedral (Fig. 1053) the most perfect relic of the kind in Scotland, or anywhere else, in the opinion of some of its frequenters and admirers. It is one of the four remarkable points of Glasgow, namely the Cathedral, the Green, a great public esplanade, the Trongate, a noble specimen of a street, and the [...] [more...] [$] 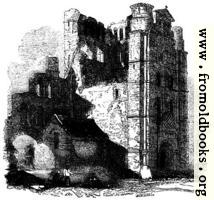 
“Among the less distinguished classes of monachism [sic, meaning monasticism] that also sprang out of the original Benedictine, may be mentioned that to which Kelso Abbey, in the town of Kelso, Roxburghshire, belonged. It acknowledges the same founder as Melrose, St. David. Kelso was repeatedy burned or otherwise injured during the English invasions. The ruins (Fig. 1054) are of mingled styles, the Norman predominating. At a certain period they were injured by incongruous additions for the use of a church congregation, [...] [more...] [$]


The Reformation in Scotland, which had so nearly caused the destruction of Glasgow Cathedral, spared one other building of the same kind, and only one—the Cathedral of St. Magnus, at the seaport twn of Kirkwall (Fig. 1055), the capital of the Orkney Islands, and this pile too has become familiar to us through the writings of the great novelist, who has made the neighbourhood the scene of his romance of ‘The Pirate;’ and with happy propriety; for the spot chosen may be said to have been dedicated from the very earliest period to the service of [...] [more...] [$] 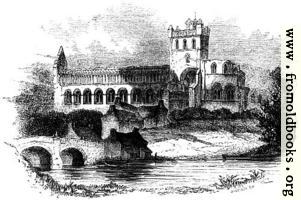 
“The Black Canons were introduced into Scotland about the same time as in England. One of their houses was at Jedburgh, the inmates [sic] of which came from Beauvais in France, early in the twelfth century. It suffered greatly in the visitations of the English, was pillaged and burned by Surrey, in 1253, at the storming of Jedburgh, and injured by Hertford in 1545. We have now only the ruins of the church (Fig. 1056), two hundred and thirty feet in length. The central tower is one hundred [...] [more...] [$] 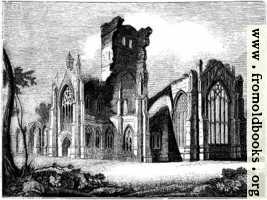 
“Some of the general features of the great abbeys of the Cistercian order, that we have noticed in England, we find repeated in the Scottish houses Melrose and New Abbey. The former, the mother Cistercian church of Scotland, was founded in 1136, by that “sore saint for the Crown,” as James VI. styled his ancestor, the royal David I., when he found how his revenues were impoverished by that saint’s pious doings. The monks came from Rivaulx Abbey in Yorkshire; they were wealthy and numerous (nearly a hundred), and [...] [more...] [$] 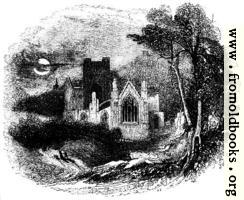 
“Francis Drake, writing in 1742, also observes “Mailross, I shall take it upon me to say, has been the most exquisite structure of the kind in either kingdom.” Lastly comes the poet, also pointing out, as the great architectural attractions of [...] [more...] [$]