1.—Ground Plan of Stonehenge in its present state.details 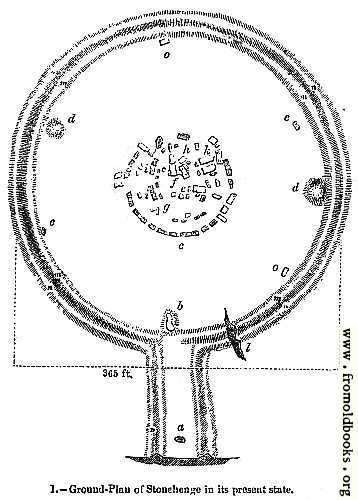 1.—Ground Plan of Stonehenge in its present state., in Salisbury Plain,Wiltshire,England more

1.—Ground Plan of Stonehenge in its present state.

This plan of Stonehenge is, of course, from 1845 or earlier.

Keeping in view the ground plan of Stonehenge in its present state (Fig. 1), we will ask the reader to follow us while we describe the appearance of the structure. Great blocks of stone, some of which are standing and some prostrate, form the somewhat confused circular mass in the centre of the plan. The outermost shadowed circle represents an inner ditch, a vallum or bank, and an exterior ditch, m, n. The height of the bank is 15 feet; the diameter of the space enclosed within the bank is 300 feet. The section l shows their formation. To the north-east the ditch and bank run off into an avenue, a section of which is shown at p. At the distance of about 100 feet from the circular ditch is a large grey stone bent forward, a, which, in the dim light of the evening, looks like a gigantic human being in the attitude of supplication. The direct course of the avenue is impeded by a stone b, wich has fallen in the ditch. A similar single stone is found in corresponding monuments. In the line of the avenue at the point marked c is a supposed entrance to the first or outer circle of stones. At the points d near the ditch are two large cavities in the ground. There are two stones e, and two o, also near the ditch. It is conjectured by some, that these formed part of a circle, which has been almost totally destroyed. The centre of the enclosed space is usually dominated the temple. It consists of an outer circle of stones, seventeen of which remain in their original position; and thirteen to the north-east, forming an uninterrupted segment of the circle, leave no doubt as to the form of the edifice. The restored plan of Dr. Stukely (Fig. 2) shows the original number of stones in this outer circle to have been thirty; those shadowed on the plan are still remaining.” (p. 1)