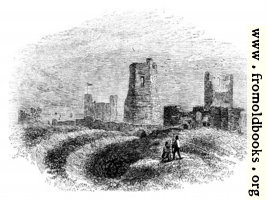 
In that curious record, in old French, of the foundation of the Castle of Dover, which we find in Dugdale’s ‘Monasticon,’ we are told that when Arviragus reigned in Britain, he refused to be subject to Rome, and withheld the tribute; making the Castle of Dover strong with ditch and wall against the Romans, if they should come. The old British hill-forts [...]) ‘the Roman conquers, he inhabits.’ So that I have ofttimes concluded that the Britons might derive themselves from the Trojans by these Romans (who doubtless descended from the Trojans), with greater probability than either the Arverni, who from Trojan blood styled themselves brethren to the Romans, or the Mamertini, Hedui, and others, who upon fabulous grounds grafted themselves into the Trojan stock. For Rome, that common mother (as one calls her), challenges all such as citizens [more...] [$] 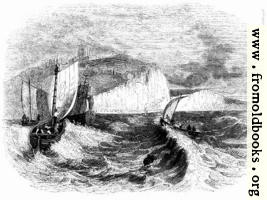 
The white cliffs of dover, complete with fishing boats in a storm, and with a barrel floating on a wave. [more...] [$] 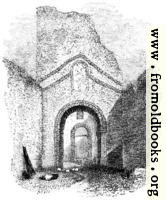 
Close by the pharos are the ruins of an ancient church (Fig. 89). This church, which was in the form of a cross, was unquestionably constructed of Roman materials, if it was not of Roman work. The tiles present themselves in the same regular courses as in the pharos. The later antiquarians are inclined to the belief that this church was constructed [...] that little has been defaced by the alterations of successive centuries (Fig 91). But here is a religious edifice of Roman workmanship, or built after the model of Roman workmanship, in the form dear to the Christian worship, the primitive and lasting symbol of the Christian faith. It is held by some, and perhaps not unreasonably, that here stood the Prætorium of the Roman Castle—the elevated spot for state display and religious ceremonial, the place of command and of sacrifice. It is held, too, that upon such a platform was erected the Sacellum, the low building where the eagles which led the Roman soldiers to victory were guarded with reverential care. Such buildings, it is contended, might grow into Christian churches. It is difficult to establish or to disprove these theories; but the fact is certain that in several of the undoubted Roman castles, or camps, is a small building of cruciform shape, placed not far from the centre of the enclosure. At Porchester (Fig. 104) and at Dover these buildings have become churches. The chronicler of Dover Castle says (See Appendix, No. 1, to Dugdale’s Account of the Nunnery of St. Martin), “In the year of grace 180 reigned in Britain Lucius. He became a Christian under Pope Eleutherius, and served God, and advanced Holy Church as much as he could. Amongst other benefits he made a church in the said castle where the people of the town might receive the Sacraments.” The chronicler then goes on to tell us of “Arthur the Glorious,” and the hall which he made in Dover Castle; and then he comes to the dreary period of the Saxon invasion under Hengist, when “the Pagan people destroyed the churches throughout the land, and thrust out the Christians.” The remaining part of this history which pertains to the old church in the castle is told with an impressive quaintness: “In the year of grace 596, St. Gregory, the Pope, sent into England his cousin St. Augustine, and many other monks with him, to preach the Christian faith to the English. There then reigned in Kent Adelbert (Ethelbert), who, through the doctrine of St. Augustine, became a Christian with all his people; and all the other people in the land so became through the teachers which St. Augustine sent to them. This Adelbert had a son whose name was Adelbold (Eadbald), who after the death of his father reigned; and he became a Pagan, and banished the people of Holy Church out of his kingdom. Then the Archbishop of Canterbury, Laurence, who was preacher after St. Augustine, fled with others out of the land. But St. Peter appeared to him, and commanded that he should go boldly to the king and reprove him for his misdeeds. He did so, and by the grace of God the king repented and became devout to God and religious. This Adelbold ordained twenty-two secular canons in the castle to serve his chapel, and gave them twenty and two provenders (means of support). The said canons dwelt in the castle a hundred and five years, and maintained a great and fine house there, and went in and out of the castle night and day, according to their will, so that the Serjeants of the king which guarded the castle could not restrain them.” The canons, it would appear from this record, conducted themselves somewhat turbulently and irregularly during these hundred and five years, till they were finally ejected by King Withred, who removed them to the Church of St. Martin in the town of Dover, which he built for them. A fragment of the ruins of the town priory is to be seen near the market-place in Dover. This ejectment is held to have happened in the year 696. If the story be correct, the church within the castle must have been erected previous to the end of the seventh century. It might have been erected at a much earlier period, when many of the Roman soldiers of Britain were converts to the Roman faith; and here, upon that commanding rock which called “Clavis et Repagulum totius Regni,” the very key and barrier of the whole kingdom, might the eagles have vailed before the emblems of the religion of peace (Figs. 92, 96), and the mailed soldiers have laid down their shields and javelins (Fig. 97) to mingle in that common worship which made the Roman and the Barbarian equals. (pp. 27ff) [more...] [$] 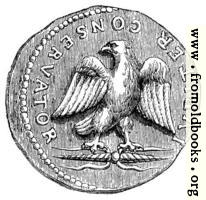 
A Roman coin showing the Eagle, the symbol of the Empire. Germany and the USA have also used the eagle for a symbol. [more...] [$] 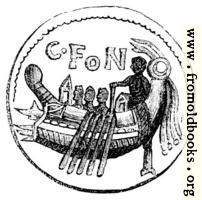 
An 1840s woodcut representing a Roman coin found in Britain; this coin shows a galley with cox and three (or six) oarsmen, or rowers. Counter to current practice, the rowers face [...] [more...] [$] 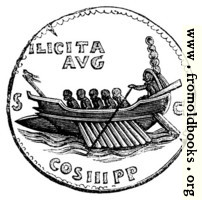 
The engraving shows a Roman coin, with a picture of a galley being rowed, whether by slaves or soldiers we cannot tell; the coinbears the words, ilicita avg s c cosiiipp. [more...] [$] 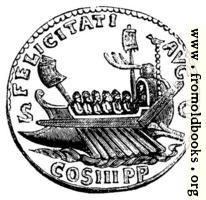 
A picture of a Roman coin showing a lighter sort of Roman galley, or rowing-boat. The rowers here appear to be wearing helmets, so presumably are soldiers rather than slaves. Compare with Fig. 94. [more...] [$] 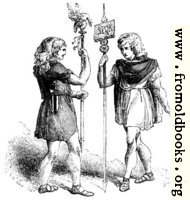 
Two Roman men, with long curly hair and skirts, adopt feminine poses, one holding a stick with a carved eagle on it, universal symbol of despotism, and the other has a banner with SPQR, the Latin that supposedly meant “The Senate and the People of Roman” [...] [more...] [$]