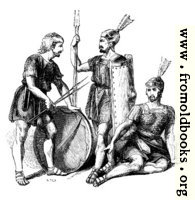 
Three Roman soldiers are shown: one with a round shield and two short spears or arrows, one with a tall shield obviously for riot control, and a long spear or javelin, and one seated on the ground. [more...] [$] 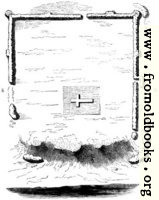 
A (rather minimal) plan of Richborough castle, an ancient Roman fort on the south-east coast of England, dating to maybe A.D. 43. There is also an amphitheatre at the site. Richborough was the first Roman fort in England, and marks the start of [...]Rutupiæ. The account in the book (following) is a little confused about which parts were built when and by whom. [more...] [$]

99.—Richborough. General View, from the East. 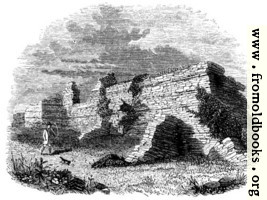 
A man hunts with rifle and dog beside the overgrown Roman walls of Richborough in Southern England. See Fig. 99 for the extract from the book. [$]

101.—Plan of the Platform and Cross, Richborough


This appears to be a side view, or elevation, rather than a plan, of the platform and cross-shaped mound at the Roman fort of Richborough. See Fig. 98 for more details. [more...] [$] 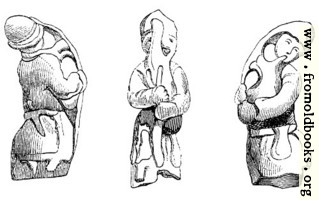 
A woodcut showing three views of a bronze statuette, supposedly Ancient Roman, depicting a Roman soldier playing the bagpipes. I couldnot find a modern picture of the object. [more...] [$] 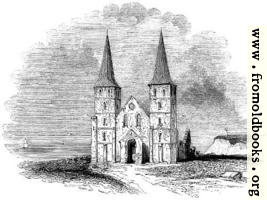 
The Roman remains still existing at Reculver are less interesting than those at Richborough, chiefly because they are of less magnitude and are more dilapidated. Very close to the ruins of the ancient church, whose spires were once held in such reverence that ships entering the Thames were wont to lower their top-sails as they passed (Fig. 103), is [...]cester indicating a camp; that name changes when the camp has perished, and the great abbey is flourishing, to Raculfminster; the camp and the abbey have both perished, and we have come back to the Latin Regulbium, in its Anglicised form of Reculver. Some fiercer destruction even than that which swept away the abbey probably fell upon the Roman city. Gibson, speaking of the coins and jewellery which have been found at various times at Reculver, says, “These they find here in such great quantities that we must needs conclude it to have been a place heretofore of great extent, and very populous, and that it has one time or other underwent some great devastation, either by war or fire, or both. I think I may be confident of the latter, there being many patterns found of metals run together.” The antiquities of Regulbium are fully described in the elegant Latin treatise of Dr. Battely, ’Antiquitates Rutupinæ,’ 1711. [more...] [$] 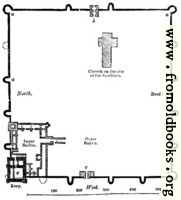 
[...] the fact is certain that in several of the undoubted Roman castles, or camps, is a small building of cruciform shape, placed not far from the centre of the enclosure. At Porchester (Fig. 104) and at Dover these buildings have become churches. The chronicler of Dover Castle says (See Appendix, No. 1, to Dugdale’s Account of the Nunnery of St. Martin), [...] [more...] [$]