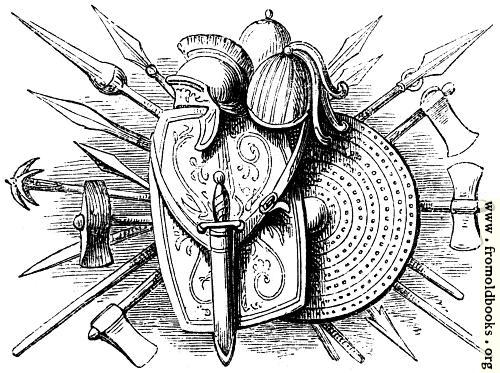 In the latter part of the summer of the year 55 B. C. (Halley, the astronomer, has gone far to prove that the exact day was the 26th of August), a Roman fleet crossed the Channel, bearing the infantry of two legions, about ten thousand men. This army was collected at the Portus Itius (Witsand), between Calais and Boulogne. Eighty galleys (Fig. 86) bore the invaders across the narrow seas. As they neared the white cliffs, which frowned upon their enterprise (Figs. 87, 88, 90), Cæsar beheld them covered with armed natives, ready to dispute his landing. The laurelled conqueror (Figs. 83, 84), who, according to Suetonius, only experienced three reverses during nine years’ command in Gaul, would not risk the Roman discipline against the British courage, on a coast thus girt with natural defences. It is held that the proper interpretation of his own narrative is, that he proceeded towards the north; and it is considered by most authorities that the flat beach between Walmer Castle and Sandwich was the place of his disembarkation. It was here, then, that the British and Roman weapons first came into conflict (Fig. 80).

But the captains and the standard-bearers marched not deliberately to the shore, as they are represented on the Column of Trajan (Fig. 82). The cavalry and the war-chariots of the active Britons met the invader on the beach; and whilst the soldiers hesitated to leave the ships, the standard-bearer of the tenth legion leaped into the water, exclaiming, as Cæsar has recorded, “Follow me, my fellow-soldiers, unless you will give up your eagle to the enemy! I, at least, will do my duty to the republic and to our general!” (Fig. 85.) The Romans made good their landing. The symbols of the great republic were henceforward to become more familiar to the skin-clothed and painted Britons (Fig. 79); but not as yet were they to be bound with the chain of the captive (Fig. 81). (p. 26)