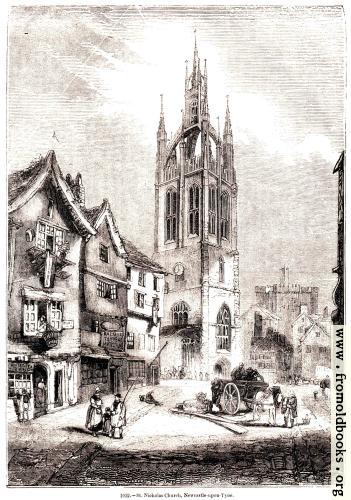 Among the more important churches erected in the period of which we treat, that of Newcastle-Upon-Tyne holds an honourable place (Fig. 1052). It crowns a bold eminence, and forms from every point of view the cihef ornament of the town. The founder was St. Osmund, Bishop of Salisbury; the time, the reign of William Rufus. Henry I. gve the church to the canons of Carlisle. It was burned in 1216, and rebuilt, as supposed, about 1359. The most remarkable feature is the steeple, two hundred and one feet high, erected in the reign of Henry VI., which is of the most elegant character, in the form of an imperial crown; the tall pinnacle is hollow, the stones only four inches broad; indeed, of such airy constrution is the whole tower, that is has been observed, a man could carry with ease under his arm the largest stone contained in it.

During a siege in 1644, a Scottish general threatened to destroy this steeple, unless the keys of the town were delivered to him. The people of Newcastle were sadly distressed between such alternatives, until their mayor ordered that some Scotch prisoners, who had been taken in the struggle for the mastery of the town, should be sent to the top of the steeple: “And then,” said he, “our enemies shall either preserve it, or e buried in its ruins.” There was no more talk of annihilating the steeple.” (p. 303)

The church became a cathedral in 1882. The tower is said to be 200 feet high. Here are some modern pictures of St. Nicholas’ Cathedral.

Note: I am using UK county boundaries as of 1907; Newcastle-Upon-Tyne is now in Tyneside.