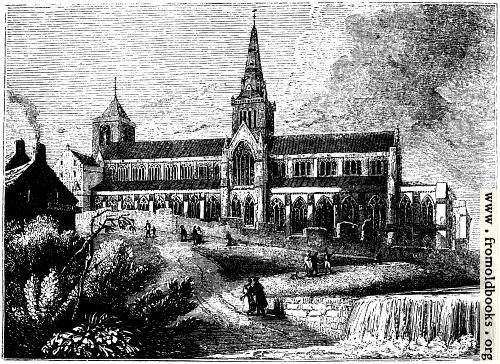 As St. Patrick’s Cathedral is the chief specimen of Gothic architecture in Ireland, so is Glasgow Cathedral (Fig. 1053) the most perfect relic of the kind in Scotland, or anywhere else, in the opinion of some of its frequenters and admirers. It is one of the four remarkable points of Glasgow, namely the Cathedral, the Green, a great public esplanade, the Trongate, a noble specimen of a street, and the graceful river Clyde, said by a Glasgow poet to be—

Glory of that and all the world beside.

Mr. Robert Chambers tells us that on these four “the native of Glasgow principally grounds his ideas regarding the consequence of the city,” and that he would defend them from any species of violation, as though they were his personal instead of public property. And this had been proved as well as said.” (p. 302)