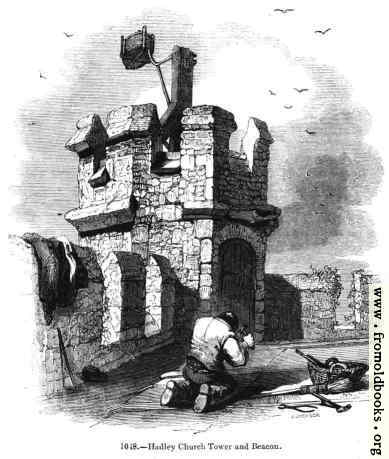 On top of a turret at the South West angle of the tower is an iron cresset, fire pan or pitch-pot, an almost unique survivor of other days. It was erected by the monks to guide wayfarers crossing Enfield Chase by night, and travellers to or from St Albans, or the north. The beacon may have been used as late as 1745 to provide an alarm to warn of the Stuart rising in the North. It was used for a more pleasant occasion to mark the marriage of the Prince of Wales in 1863, when the future Edward VII married Princess Alexandra of Denmark.”

“A beacon-tower, of ruder fashion than that of old St. Botolph’s, and used generally for less peaceful purposes, is to be seen at Hadley Church, Middlesex (Fig. 1048). “before the reign of Edward III., beacons were but stacks of wood set up on high places, which were fired when the coming of enemies was descried; but in his reign pitch-boxes, as now they be, were, instead of those stacks, set up; and this properly is a beacon.” (Lord Croke.) The pitch-box, or fire-pot, is still remaining at Hadley, and a picturesque object itis, reminding us of the warlike days when watches were regularly stationed at such places, and horsemen, called hobbelars, according to Camden, waited by, “to give notice in daytime of an enemy’s approach, when the fire would not be seen.” A perilous task these watchers and hobbelars must have had of it, for of course it would be an object with the enemy to seize the beacons to prevent alarm spreding. Many a deadly fray that has left no record may have occurred on this tranquil and rural spot.” (p. 303)