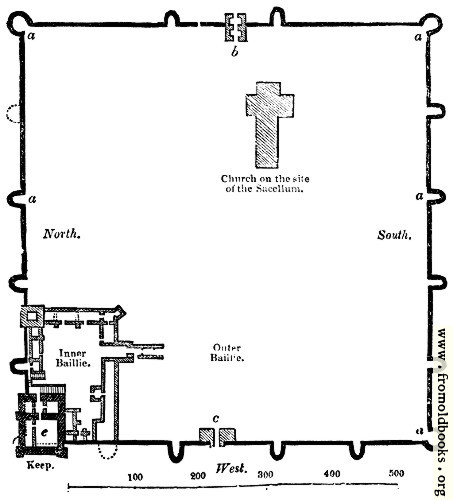 [...] the fact is certain that in several of the undoubted Roman castles, or camps, is a small building of cruciform shape, placed not far from the centre of the enclosure. At Porchester (Fig. 104) and at Dover these buildings have become churches. The chronicler of Dover Castle says (See Appendix, No. 1, to Dugdale’s Account of the Nunnery of St. Martin), “In the year of grace 180 reigned in Britain Lucius. He became a Christian under Pope Eleutherius, and served God, and advanced Holy Church as much as he could. Amongst other benefits he made a church in the said castle where the people of the town might receive the Sacraments.” The chronicler then goes on to tell us of “Arthur the Glorious,” and the hall which he made in Dover Castle; and then he comes to the dreary period of the Saxon invasion under Hengist, when “the Pagan people destroyed the churches throughout the land, and thrust out the Christians.” (p. 30)

The plan of Porchester Castle was obviously made for another publication and reused here: the labels a, b, c, d and e are not explained in the text. The spelling Inner Baillie would today be written Inner Bailey.

Porchester Castle was built in the third century, so the text quoted in the book about Lucius should be taken with a grain of salt, along with the mention of King Arthur.