103.—Ruins of the Ancient Church of Reculver.details 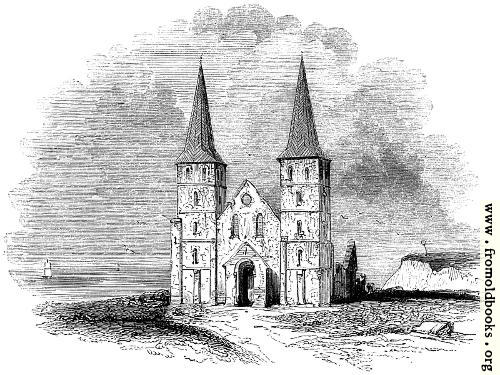 103.—Ruins of the Ancient Church of Reculver., in Reculver, Kent, England more

The Roman remains still existing at Reculver are less interesting than those at Richborough, chiefly because they are of less magnitude and are more dilapidated. Very close to the ruins of the ancient church, whose spires were once held in such reverence that ships entering the Thames were wont to lower their top-sails as they passed (Fig. 103), is an area, now partly under the plough and partly a kitchen garden. It is somewhat elevated above the surrounding fields; and, descending a little distance to the west of the ruined church, we are under the Roman wall, which still stands up on the western and southern sides with its layers of flat stone and concrete, defying the dripping rain and the insidious ivy. The castle stood upon a natural rising ground, beneath which still flows the thread-like stream of the river Stour or Wantsum. Although it was once the key of the northern mouth of the great estuary, it did not overhang the sea on the northern cliff, as the old church ruin now hangs. When the legions were here encamped, it stood far away from the dashing of the northern tide, which for many generations has been here invading the land with an irresistible power. Century after century has the wave been gnawing at this cliff; and, as successive portions have fallen, the bare sides have presented human bones, and coins, and fragments of pottery, and tessellated pavements, which told that man had been here, with his comforts and luxuries around him, long before Ethelbert was laid beneath the floor of the Saxon church, upon whose ruins the sister spires of the Norman rose, themselves to be a ruin, now preserved only as a sea-mark. Reculver is a memorable example of the changes produced in the short period of three centuries. Leland’s description of the place is scarcely credible to those who have stood beneath these spires, on the very margin of the sea, and have looked over the low ruined wall of the once splendid choir, upon the fishing-boats rocking in the tide beneath:—“Reculver is now scarce half a mile from the shore.” In another place—“Reculver standeth within a quarter of a mile or a little more from the sea-side. The town at this time is but village-like; sometime where as the parish church is now was a fair and a great abbey, and Brightwald, Archbishop of Canterbury, was of that house. The old building of the church of the Abbey remaineth, having two goodly spiring steeples. In the entering of the choir is one of the fairest and the most ancient cross that ever I saw, nine feet, as I guess, in height: it standeth like a fair column.” Long ago has the cross perished, with its curiously wrought carvings and its painted images; and so has perished the “very ancient book of the Evangeles,” which Leland also describes. The Romans have left more durable traces of their existence at Reculver than the ministers of religion, who here, for centuries, had sung the daily praises of Him who delivereth out of their distress those “that go down to the sea in ships, and occupy their business in great waters.” The change in names of places sometimes tells the story of their material changes. The Regulbium of the Romans became the Raculfcester of the Saxons, cester indicating a camp; that name changes when the camp has perished, and the great abbey is flourishing, to Raculfminster; the camp and the abbey have both perished, and we have come back to the Latin Regulbium, in its Anglicised form of Reculver. Some fiercer destruction even than that which swept away the abbey probably fell upon the Roman city. Gibson, speaking of the coins and jewellery which have been found at various times at Reculver, says, “These they find here in such great quantities that we must needs conclude it to have been a place heretofore of great extent, and very populous, and that it has one time or other underwent some great devastation, either by war or fire, or both. I think I may be confident of the latter, there being many patterns found of metals run together.” The antiquities of Regulbium are fully described in the elegant Latin treatise of Dr. Battely, ’Antiquitates Rutupinæ,’ 1711.