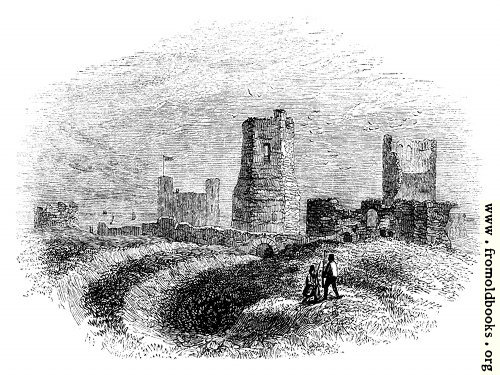 In that curious record, in old French, of the foundation of the Castle of Dover, which we find in Dugdale’s ‘Monasticon,’ we are told that when Arviragus reigned in Britain, he refused to be subject to Rome, and withheld the tribute; making the Castle of Dover strong with ditch and wall against the Romans, if they should come. The old British hill-forts and cities were not works of regular form, like the camps and castles of the Romans; and thus the earliest remains of the labours of man in Dover Castle exhibit a ditch and a mound of irregular form, a parallelogram with the corners rounded off, approaching to something like an oval. Yet within this ditch are the unquestionable fragments of Roman architecture, still standing up against the storms which have beaten against them for nearly eighteen centuries (Fig. 89). We may well believe, therefore, that the statement of the chronicler is not wholly fabulous when he said that a British King strengthened Dover Castle; and that the Romans, as in other cases, planted their soldiers in the strongholds where the Britons had defied them. Be this as it may, the Roman works of Dover Castle are amongst the most interesting in the island, remarkable in themselves, suggestive of high and solemn remembrances. Toil up the steep hill, tourist, and mount the tedious steps which place you on the heights where stands this far-famed castle. Look landward, and you have a prospect of surpassing beauty, not unmixed with grandeur; look seaward, and you may descry the cliffs of France, with many a steamboat bringing in reality those lands together which dim traditions say were once unsevered by the sea. Look not now upon the Norman keep, for after a little space we will ask you to return thither; but wind round the slight ascent which is still before you, till you are at the foot of the grassy mound upon which stand the ruined walls which attest that here the Romans trod. That octagonal building, some thirty or forty feet high, and which probably mounted to a much greater height, was a Roman pharos, or lighthouse. Mark the thickness of its walls, at least ten feet; see the peculiarity of its construction, wherever the modern casing, far more perishable than the original structure, will permit you. The beacon-fires of that tower have long been burnt out. They were succeeded by bells, which rung their merry peals when kings and lord-wardens came here in their cumbrous pageantry. The bells were removed to Portsmouth, and the old tower was unroofed. Man has taken no care of it; man has assisted the elements in its destruction. But its builders worked not for their own age alone, as the moderns work. Its foundations are laid in clay, and not upon the chalk. The thin flat bricks, which are known as Roman tiles, are laid in even courses, amidst intermediate courses of blocks of hard stalactitical concretions which must have been brought by sea from a considerable distance. Some of the tiles are of a peculiar construction, having knobs and ledges as if to bind them fast with the other materials. In the true Roman buildings the uniformity of the courses, especially where tiles are used, is most remarkable. Such is the case in this building: “With alternate courses formed of these and other Roman tiles, and then of small blocks of the stalactitical incrustations, was this edifice constructed, from the bottom to the top:—each course of tiles consisting of two rows; and each course of stalactites, of seven rows of blocks, generally about seven inches deep, and about one foot in length. Five of these alternate courses, in one part, like so many stages or stories, were discernible a few years ago very clearly.”—(King.) When the poor fisherman of Rutupiæ (Richborough) steered his oyster-laden bark to Gesoriacum (Boulogne), the pharos of Dover lent its light to make his path across the Channel less perilous and lonely. At Boulogne there was a corresponding lighthouse of Roman work; an octagonal tower, with twelve stages of floors, rising to the height of one hundred and twenty-five feet. This tower is said to have been the work of Caligula. It once stood a bowshot from the sea; but in the course of sixteen centuries the cliff was undermined, and it fell in 1644. The pharos of Dover has had a somewhat longer date, from the nature of its position. No reverence for the past has assisted to preserve what remains of one of the most interesting memorials of that dominion which had such important influences in the civilization of England. The mixed race in our country has, in fact, sprung from these old Romans; and the poetical antiquary thus carries us back to the great progenitors of Rome herself: “Whilst,” says Camden, “I treat of the Roman Empire in Britain (which lasted, as I said, about four hundred and seventy-six years), it comes into my mind how many colonies of Romans must have been transplanted hither in so long a time; what numbers of soldiers were continually sent from Rome, for garrisons; how many persons were despatched hither, to negotiate affairs, public or private; and that these, intermarrying with the Britons, seated themselves here, and multiplied into families: for, ‘Wherever’ (says ) ‘the Roman conquers, he inhabits.’ So that I have ofttimes concluded that the Britons might derive themselves from the Trojans by these Romans (who doubtless descended from the Trojans), with greater probability than either the Arverni, who from Trojan blood styled themselves brethren to the Romans, or the Mamertini, Hedui, and others, who upon fabulous grounds grafted themselves into the Trojan stock. For Rome, that common mother (as one calls her), challenges all such as citizens

(“Whom conquer’d, she in sacred bonds hath tied.”)

The old traditions connected with Dover Castle, absurd as they are, are founded upon the popular disposition to venerate ancient things. The destruction of ancient things in this country, during the last three centuries, was consummated when a sceptical, sneering, unimaginative philosophy was enabled, in its pride of reason, to despise what was old, and to give us nothing that was beautiful and venerable in the place of what had perished. Lambarde thus writes: “The Castle of Dover, say Lydgate and Rosse, was first builded by Julius Cæsar, the Roman emperor, in memory of whom they of the Castle keep till this day certain vessels of old wine and salt which they affirm to be the remain of such provision as he brought into it.” The honest topographer adds, with a beautiful simplicity, “As touching the which, if they be natural and not sophisticate, I suppose them more likely to have been of that store which Hubert de Burgh laid in there.” Now Hubert de Burgh lived three hundred and fifty years before Lambarde; and we are inclined to think that even his vessels of old wine might have stood a fair chance of being tapped and drunk out during the troublesome times which elapsed between the reign of John and the reign of Elizabeth. But yet it were vain of us to despise this confiding spirit of the old writers. We have gained nothing in literature or in art, perhaps very little in morals, by calling for absolute proof in all matters of history; and by fancying that, if we cannot have a clear microscopic bird’s-eye view of the past, we are to turn from its dimly lighted plains, and its misty hills losing themselves in the clouds, as if there were nothing soothing and elevating in their shadowy perspective. There must be doubt and difficulty and uncertainty in all that belongs to very remote antiquity:—

“Darkness surrounds us; seeking, we are lost

On Snowdon’s wilds, amid Brigantian coves,

Or where the solitary shepherd roves

Along the Plain of Sarum, by the Ghost

Of Time and Shadows of Tradition crost;

And where the boatman of the Western Isles

Slackens his course, to mark those holy piles

Which yet survive on bleak Iona’s coast.

Nor these, nor monuments of eldest fame,

Nor characters of Greek or Roman fame,

To an unquestionable Source have led;

Enough—if eyes that sought the Fountain-head,

In vain, upon the growing Rill may graze.”

This is wisdom—a poet’s wisdom, which has sprung and ripened in an uncongenial age. But if we seek the “growing Rill,” we shall not gaze upon it with less pleasure if we have endeavoured, however imperfectly and erringly, to trace it to “the Fountain-head.” (p. 26)