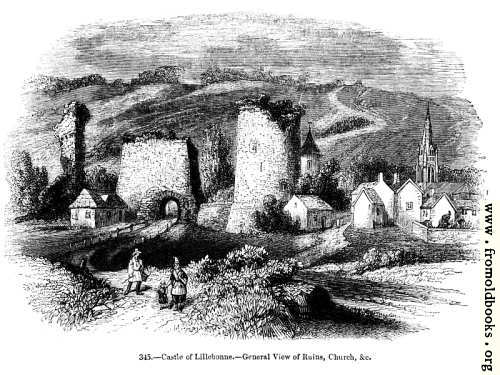 The character of William of Normandy [William the Conqueror] was so remarkable, and indeed was such an element of success in his daring attempt upon the English crown, that what is personally associated with him, even though it be found not in our own island [British Isles], belongs to the antiquities of England. He was a stark man, as the Saxon chronicler describes him from personal knowledge a man of unbending will and ruthless determination, but of too lofty a character to be needlessly cruel or wantonly destructive. Of his pre-eminent abilities there can be no question. Connected with such a man, then, his purposes and success, the remains of his old Palace at Lillebonne (Fig. 345), which may be readily visited by those who traversethe Seine in its steam-boats, is an object of especial interest to an Englishman. For here was the great Council held for the invasion of England, and the attempt was determined against by the people collectively, but the wily chief separately won the assent of their leaders, and the collective voice was raised in vain.” (p. 87)