Opening of a New Promenade and Drinking-Fountain at Blackpool, Lancashiredetails 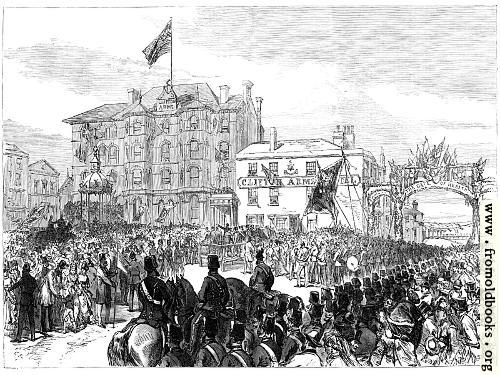 Opening of a New Promenade and Drinking-Fountain at Blackpool, Lancashire

The pleasant and healthy seaside town of Blackpool, on the Lancashire coast, an hour’s journey from Manchester and Liverpool, has gained a new attraction and local advantage by the opening of the promenade and carriage-drive, and of an improved entrance to the fine iron pier constructed a few years ago, to which a jetty for steam-boats was lately appended. The promenade, which has cost £60,000, borrowed by the local board, under a special Act of Parliamet, is two miles in length, comprising an embankment or sea-wall along the low-lying part of South Shore, and an iron viaduct at the northern extermity, round Bailey’s Hotel. The carriage-drive runs alongside the promenade or parade to be used by foot passengers. This commands an uninterrupted view of the open sea, with the Westmorland and Cumberland mountains to the right hand, the moer distant mountains of North Wales to the left. and a glimpse now and then of the Isle of Man in a north-westerly direction. The engineers of this work are Messrs. Garlick, Park, and Sykes, of Preston. There are two piers at Blackpool. The north pier, which was built in 1862 or 1863, for a joint-stock company, from the design and under the direction of Mr. Eugenius Birch, of London, is similar to those erected by him at Margate, Brighton, Aberystwith, and other places, being formed of iron, resting on screw piles. The south pier, which was completed in June, 1868, by another company, is constructed of wrought iron and timber, about 1500ft. in length. It is the first-mentioned pier, however, commonly spoken of as “the old pier,” to which we must refer on this occasion. Last year the Blackpool Pier Company began a jetty at the end of it, at a cost of £7,000, to enable steam-boats to land or take up passengers at low tide. They have now made a new entrance, with handsome gates and toll-houses, designed by Mr. Birch and built by Messrs. Laidlaw and Sons, of Glasgow, rendering the Blackpool Pier one of the most complete and effective works of its kind in England. A new drinking-fountain. with a bronze dome on eight pillars, a clock, and a gas-lamp upon an octagonal stone base, has been placed in Bellevue or Talbot-square, opposite the new entrance to the pier. It was designed and cast by Messrs. G. Smith and Co., of the Sun Foundry, Glasgow; and its cost its defrayed by the proceeds of public readings, athletic contests, and brass-band performances, and private gifts or subscriptions.

Such are the new features of this popular Lancashire watering-place. The opening of the promenade and fountain, on Easter Monday, is the subject of one of our Illustrations. The streets and piers were gaily decorated with flags; and there was a triumphal arch, inscribed with the title, “The Gate of Health,” at the corner of Talbot-square, surmounted at each side with figures of a life-boat man and a volunteer fireman, bearing the mottoes “Always Ready” and “Always Willing.” Other triumphal arches were erected at other points along the promenade. The procession consisted of the Lancashire artillery volunteers, under Lieutenant-Colonel Birchall, with their band, the bands of the Blackburn volunteer corps and another; the Masonic lodges of Lancashire and Yorkshire; the invited guests in nine carriages, including the Right Hon. J. Wilson-Patten, M.P., the Hon. F. A. Stanley, M.P., and Mr. Cawley, M.P.; the Mayors of Preston, Salford, Bolton, Blackburn, Wigan, Lancaster, Bradford, Halifax, Rochdale, Barnley, and Stalybridge; Major Preston, Mr. E. Birley, and other gentlemen; Mr. Cocker, chairman of the local board of Blackpool; the members of the several boards and committees; the engineers andcontractors; the Volunteer Fire Brigade, with engine and hose; the life-boat, with its crew; the Friendly societies, trade societies, and schools of the town. The butchers rode on horseback, but one of them rode a fine fat ox. The procession was well arranged, and had a good effect. The proclamation of the opening was made on a platform in Talbot-square, after a brief address from Colonel Wilson-Patten. There was a banquet in the Assembly Room. (p. 458)