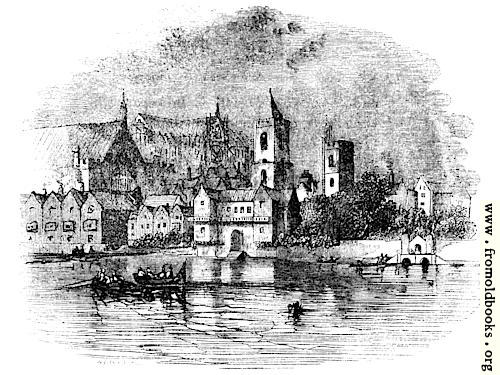 2087.—Westminster About 1600., in Westminster,London,England more

The city of Westminster, some four hundred years ago, had the churces and cathedrals of today, but was perhaps somewhat less built-up! Here we are looking across the River Thames at houses, the old palace, and, in the dim background, the great cathedral.

It has been observed by an old writer, Howel, that the union of the two crowns of England and Scotland in 1603, conduced not a little to unite the two cities of London and Westminster (Fig. 2087); “for,” says he, “the Scots, greatly multiplying here, nestled themselves about the Court; so that the Strand, from the mud walls and thatched cottages, acquired that perfection of building it now possesses:” and thus went on the process which made London, according to the quaint fancy of the writer just named, like a Jesuit’s hat, the brims of which were larger than the block; and that induced the Spanish Ambassador, Gondomar, to say to his Royal Mistress after his return from London, and whilst describing the place to her,—“Madam, I believe there will be no city left shortly, for all will run out of the gates to the suburbs.”