2088.—The Custom-House, London, as it appeared before the Great Fire. (From a Print by Hollar.)details 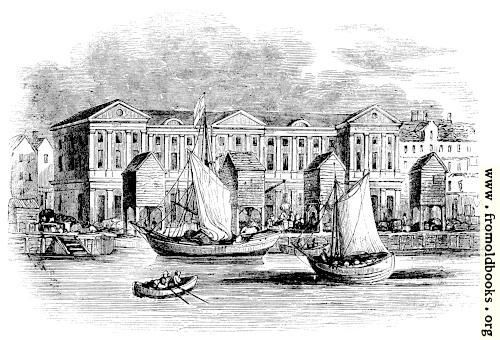 2088.—The Custom-House, London, as it appeared before the Great Fire. (From a Print by Hollar.), in Customs House, London, England more

2088.—The Custom-House, London, as it appeared before the Great Fire. (From a Print by Hollar.)

In all this increase of wealth and comfort, London of course took the lion’s share; the days had long passed away when as a port it ranked but a little higher in reputation than the ports of Boston, Lynn, and Southampton; and it began to be a general subject of complaint out of London, how it monopolised “traffic by sea and retailing by land, and exercise of manual arts also.” The Custom-house of London, the building shown in our engraving (Fig. 2088), was burnt down in the Great Fire. In other towns of England, however, indications present themselves, showing that they share in this prosperity, each in its own particular way: Plymouth erects its lighthouse (Fig. 2098) to guide the constantly-increasing concourse of ships that pass to and from its harbour; and Leeds builds its immense Cloth-Hall, the fore-runner of those edifices which at the present day strike the visitor with surprise by their extent and simple plainness—features that suggest forcibly the gigantic amount and the primitive modes of the business done within them. (p. 227)