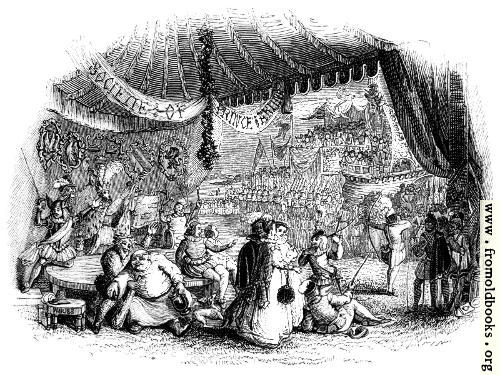 The engraving shows the interior of a large tent or pavillion, with a banner reading Socitie of Prince Arthur hanging from the ceiling, festooned with a garland. There is a round table and, in the front, a corpulent monk with tonsured head and a large wine-flask in his hand; a man dressed as a satyr perhaps, with a laurel wreath of victory on his head, gestures towards the entrance of the canopy, and outside we see archers and spear-men lined up, flags flying, the royal box, all watching a man with a bow about to shoot. In the foreground some ladies, some gentlemen, some youths and a drummer. A bugle lies on the grass.

At Mile End the gorgeous archery festival took place annually, which was known as Prince Arthur’s Show (Fig. 1805); the “prince” being formally recognised, under that title by Henry VIII., who, going once to see the performance, was so pleased, that he even confirmed by charter, the “famous Order of Knights of Prince Arthur’s Round Table or Society.”