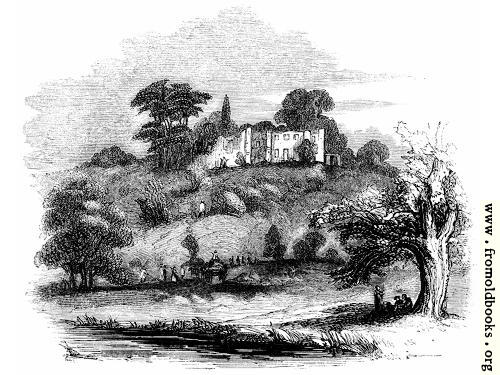 [...] Not many months after, the earl’s brother, thomas, Archbishop of Canterbury, banished in the same cause, set the crown of Richard on Bolingbroke’s head. Of course the Arundels found favour with the new king. We find the earl’s second son, John Fitzalan, had leave from him to embattle his manor-house at Betchworth (Fig. 928) [i.e. to crenellate, or fortify it]: the present old mansion stands on the castle site. (p. 254)

According to Chalmers’ Dictionary of biography (1811 – 1815 or so), one Abrham Tucker (1705 – 1774), an English writer, purchased Betchworth Castle and its estate in 1727, and, when he died, left it to his eldest daughter. She in turn died unmarried in 1794, and the estate passed to her nephew, Sir Henry Paulet St. John Mildmay, who sold it to a banker, Henry Peters, who still owned it in 1812. But by the time Old England was written and this woodcut published, it appears to have become ruined.