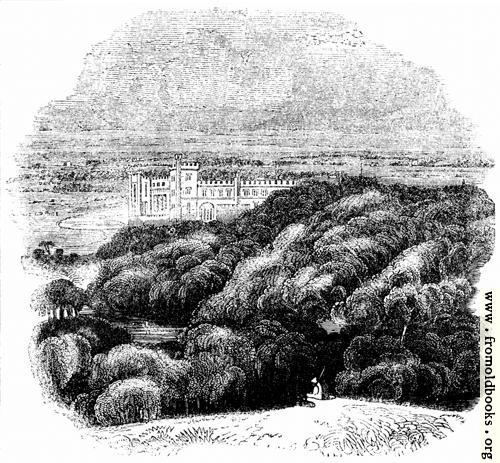 In this wood engraving, the castle is in the middle distance, with someone squatting or perhaps sitting and fishing, in the foregroud to give a sense of scale.

Arundel Castle (Fig. 926) has for many centuries enjoyed a privilege given to no other residence in the kingdom, that of conveying the title of Earl to its possessor without creation. From the Albinis and Fitzalans it passed by marriage to the Howards under Elizabeth. Some venerable walls of the ancient castle have been preserved, and the keep is converted to a singular use, it is a cage for owls, sent from North America to the possessor of the modern magnificent residence. Two Fitzalans perished by the axe: Edmund, at Hereford, for arming against Edward II. and the Despensers; and Richard Fitzalan, in King Richard II.’s actual presence, according to Froissart, for conspiring against him here, with many others of the high nobility. The people of England mourned for this last earl as a martyr, for he was of the few nobles who stood out for their liberties. Arundel’s death was one of the last and most odius of Richard’s multiplied tyrannies. It is said the shade [ghost] of the injured earl, covered with blood, and reproaching him for his injustice, often “revisited the glimpses of the moon” in Richard’s dreams. Not many months after, the earl’s brother, thomas, Archbishop of Canterbury, banished in the same cause, set the crown of Richard on Bolingbroke’s head. Of course the Arundels found favour with the new king. We find the earl’s second son, John Fitzalan, had leave from him to embattle his manor-house at Betchworth (Fig. 928) [i.e. to crenellate, or fortify it]: the present old mansion stands on the castle site.” (p. 254)

Arundel is near Chichester in Sussex. Some links to the Encyclopaedia: