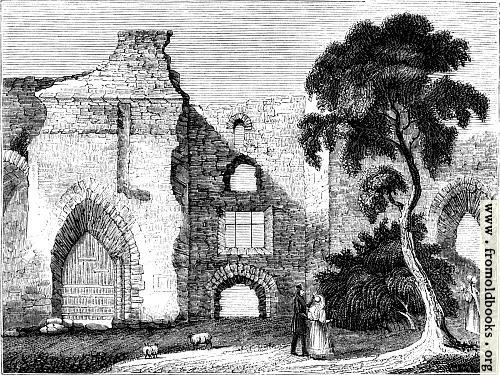 The ruins we can still see today were built by Bishop Alexander (“the Magnificent”) of Lincoln in the first half of the twelfth century, although there was a castle here at least as early as 1089, almost a thousand years ago.

The picture shows the boarded-up early mediaeval castle gate [US: medieval castle gate] seen from within the courtyard, with sheep grazing as a couple (he with a top hat, she with a bonnet and dress) walk across the grass, and in the background a lady reads a book, perhaps of poetry. Ruins of castle walls and empty windows are visible. Charles Knight gives us the following rather convoluted prose to accompany this wonderful gothic ruin of a medieval castle:

Newark Castle (Fig. 425), erected by Bishop Alexander, the well-known castle-building prelate, who seems indeed to have thought he had a mission that way, and who certainly exhibited no lack of zeal in fulfilling it: Newark (i.e. New-Work, hnce the name of the town), a rare example for the time of any departure from the principle of considering a castle merely as a stronghold, rather than as a place of residence also; Newark, with its high historical and military reputation, twice unsuccessfully beseiged by the Parliamentarians during the [English] Civil War, and only delivered up, not taken, at last in consequence of Charles’s own directions when he had given himself up to the Scots,—under what circumstances do we behold the ruins of this structure? Why, as if in mockery of that reputation, wooden bowls now roll noiselessly but harmlessly about the close-shaven green, in one part of the castle area, where cannon-balls once came thick and fast, dealing destruction and death on all sides; whilst in another, peaceful men and women now congregate in the ‘commodious market.’ ” (p. 103)