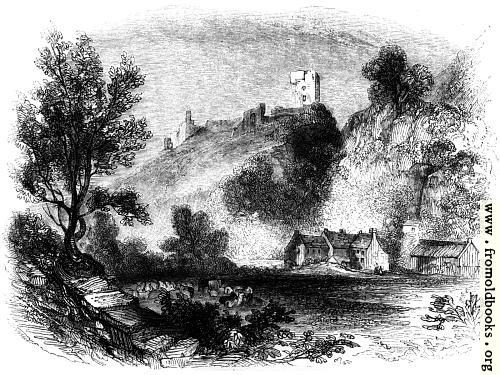 One of the most grandly situated of castles is that of Peveril of the Peak (FIg. 424), built by a natural son of the Conquerer [i.e. a son of William the Conquerer], whose name it bars. This was some centuries afterwards in the possession of William Peveril, a valiant knight, who had two daughters, one of whom, Mellet, having privily resolved to marry none but a knight who should distinguish hiself for his warlike prowess, her father, sympathizing with her feelings, determined to invite the noble youth of England generally to compete for such a prize in a grand tournament. The castle of Whittington, in the county of Salop [i.e. Shropshire], was also to reward the victor by way of a fitting dowry for the bride. We may judge of the hosts who would assemble at such an invitation; and even royal blood was among them, in the person of the Scottish King’s son. Worthy of the day, no doubt, were the feats performed. Among the combatants, one knight with a silver shield and a peacock for his crest speedily distinguished himself. The best and bravest in vain endeavoured to arrest his successful career. The Scottish prince was overthrown; so was a baron of Buroyne. Ther conqueror was adjudged the prize. Guarine de Meez, a branch of the house of Lorraine, and an ancestor of the lord Fitzwarren, thus wooed and won an English bride, at Peveril’s Place in the Peak.” (p. 106)