283.—Royal Costume, and the Harness and Equipment of Horses. (Cotton M.S.)details 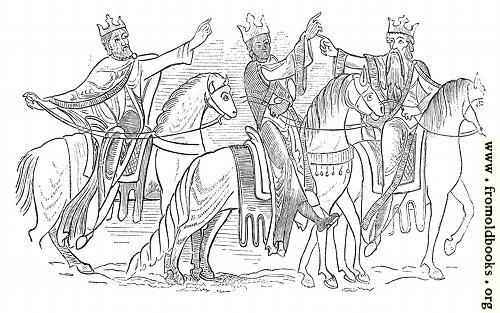 283.—Royal Costume, and the Harness and Equipment of Horses. (Cotton M.S.) more

283.—Royal Costume, and the Harness and Equipment of Horses. (Cotton M.S.)

The Three Kings, the figures of legend that are derived from the story of the wise men, astronomers or astrologers who visited the infant Jesus. The Gospels do not say how many of them there were, but names three of them, and tradition says that there were exactly three. Some traditions make two of them white and one black, although since Jesus was a Palestinian Jew this part seems a bit improbable. At any rate here we have three kings with crowns riding horses with bits and stirrups, anachronistically.

The picture history of the manners and customs of a remote period is perhaps more interesting and instructive, is certainly more to be relied on, than any written description. It is difficult for a writer not to present the forms and hues of passing things as they are seen through the glass of his own imagination. But the draftsman, especially in a rude stage of art, is in a great degree a faithful copyist of what he sees before him. The paintings and sculptures of Egypt furnish the best commentary upon many portions of the Scripture record. The coloured walls of the ruined houses of Pompeii exhibit the domestic life of the Roman people with much greater distinctness than the incidental notices of their poets and historians. This is especially the case as regards the illuminations which embellish many Anglo-Saxon manuscripts. Some of these were not intended by the draftsmen of those days to convey any notion of how the various ranks around them were performing the ordinary occupations of life: they were chiefly for the purpose of representing, historically as it were, events and personages with which the people were familiarised by their spiritual instructors. But, knowing nothing of those refinements of art which demand accuracy of costume, and caring nothing for what we call anachronisms, the limners of the Anglo-Saxon chronicles and paraphrases painted the Magi in the habits of their own kings, riding on horses with the equipment of the time (Fig. 283); they put their own harp into the hands of the Royal Psalmist (Fig. 284); and they exhibited their own methods of interment when they delineated the Raising of Lazarus (Fig. 289).” (p. 66)