114.—Conflict between Romans and Barbarians.details 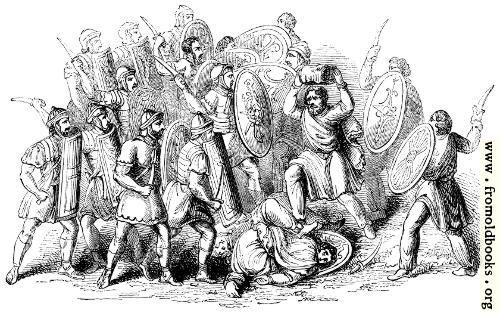 114.—Conflict between Romans and Barbarians. more

114.—Conflict between Romans and Barbarians.

The wood engraving shows men with curved square shields and helmets fighting men with round shields at close range. The winners are always the ones to call the losers barbarians.

For ninety-seven years after the second expedition of Cæsar the country remained at peace with Rome. Augustus (Fig. 117) threatened an invasion; but his prudence told him that he could not enforce the payment of tribute without expensive legions. The British princes made oblations in the Capitol; and, according to Strabo, “rendered almost the whole island intimate and familiar to the Romans.” Cunobelinus (Fig. 121), the Cymbeline of Shakspere, was brought up, according to the chroniclers, at the court of Augustus. Succeeding emperors left the Britons in the quiet advancement of their civilization, until Claudius (Fig. 118) was stirred up to the hazard of an invasion. In the sonorous prose of Milton—“He, who waited ready with a huge preparation, as if not safe enough amidst the flower of all his Romans, like a great Eastern king with armed elephants marches through Gallia. So full of peril was this enterprise esteemed, as not without all this equipage and stronger terrors than Roman armies, to meet the native and the naked British valour defending their country.” (Fig. 114.) (p. 38)