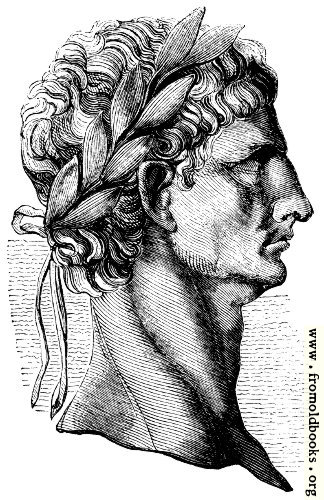 Succeeding emperors left the Britons in the quiet advancement of their civilization, until Claudius (Fig. 118) was stirred up to the hazard of an invasion. In the sonorous prose of Milton—“He, who waited ready with a huge preparation, as if not safe enough amidst the flower of all his Romans, like a great Eastern king with armed elephants marches through Gallia. So full of peril was this enterprise esteemed, as not without all this equipage and stronger terrors than Roman armies, to meet the native and the naked British valour defending their country.” (Fig. 114.) The genius of Roman victory inscribed the name of Claudius with the addition of Britannicus (Fig. 116). The coins of Claudius still bear the symbols of his British triumph (Figs. 119, 120). (p. 38)