113.—The Thames at Coway Stakes.details 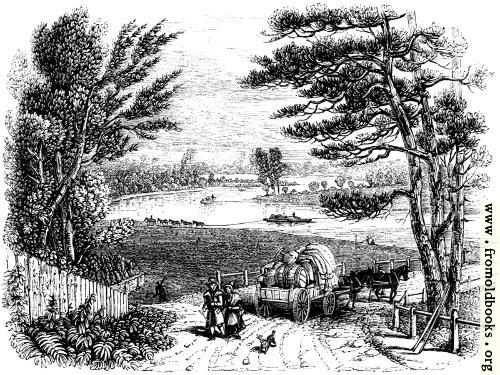 Tall trees sway either side of a dirt road down which a cart is pulled way from us by a pair of heavy horses; two women and a dog approach us on the same road. In the background a barge is pulled along a wide, winding river by a team of maybe five horses walking along the riverbank. All very bucolic and reminiscent of Constable’s paintings.

The actual stakes were removed in 1855 or so as part of the work of building brentford Dock. They may, however, have been mediæval fish traps.

It is a rational belief of the English antiquaries that there was a great British road from Richborough to Canterbury, and thence to London. Cæsar’s formidable enemy, Cassivelaunus, had retreated in strong force to the north bank of the Thames; and Cæsar speaks of the river as dividing the territories of that chieftain from the maritime states. If we look upon the map of England, we shall see how direct a march it was from Canterbury to Oatlands near Walton, without following the course of the river above London. Crossing at this place, Cæsar would march direct, turning to the north, upon the capital of Cassivelaunus,—Verulam, or Cassiobury. Our engraving (Fig. 113) represents the peaceful river gliding amidst low wooded banks, disturbed only by the slow barge as it is dragged along its stream. At the bend of the river are to this hour these celebrated stakes. They were minutely described in 1735, in a paper read to the Society of Antiquaries, by Mr. Samuel Gale: “As to the wood of these stakes, it proves its own antiquity, being by its long duration under the water so consolidated as to resemble ebony, and will admit of a polish, and is not in the least rotted. It is evident from the exterior grain of the wood, that the stakes were the entire bodies of young oak-trees, there not being the least appearance of any mark of any tool to be seen upon the whole circumference, and if we allow in our calculation for the gradual increase of growth towards its end, where fixed in the bed of the river, the stakes, I think, will exactly answer the thickness of a man’s thigh, as described by Bede; but whether they were covered with lead at the ends fixed in the bottom of the river, is a particular I could not learn; but the last part of Bede’s description is certainly just, that they are immoveable, and remain so to this day.” Mr. Gale adds, that since stating that the stakes were immoveable, one had been weighed up, entire, between two loaded barges, at the time of a great flood. (p.38)