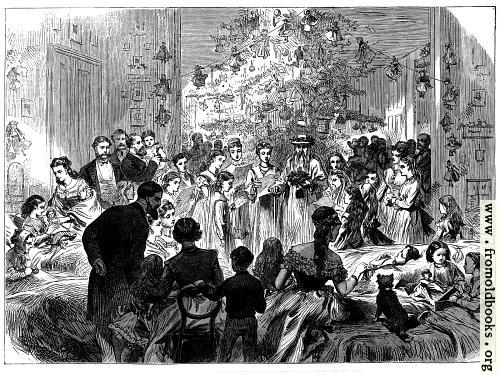 FESTIVAL AT THE
EAST LONDON HOSPITAL
FOR CHILDREN.

From among the entertainments given on a New-Year’s Eve at the different hospitls and charitable institutions in London, we have selected for illustration one given at the East London Hospital for Children.

This hospital was founded, in January, 1868, by a gentleman and his wife, who were both thoroughly acquainted with the locality and the great need of such a hospital. It was opened with ten beds only for in-patients, and a dispensary for women; but within ten months, by the assist­ance of friends, the number was increased to forty. The demand for admittance is very great, so that even this accomodation is far from sufficient; and the committee in whose hands the institution has been placed are obliged to appeal to the public for funds to provide a more suitable building. We may mention that the houses in which the hospital now exists were previously used as a warehouse and a sailmaker’s loft. The characteristics of the institution were most ably described by Mr. Dickens in All the Year Round of Dec. 9, 1868, under the title of “A Small Star of the East.”

The Christmas-tree was at the end of one of the largest wards, and around it were gathered those patients well enough to get up, and nearly 200 other children who had formerly been relieved at the institution. It was, indeed, a sight to rejoice the hearts of those who were thus providing for these poor a few hours of unwonted pleasure. In front of this large group came beds on each side, whose little occupants, though unable to rise, were surrounded by toys and other amusements.

Besides the Christmas-tree, there was a Punch and hudy in the boys’ ward, which, from the roars of laughter, seemed to be thoroughly appreciated; and in the course of the evening dis­solving views, exhibited by one of the committee, afforded immense delight in the out-patients’ room. This part of the amusements was afterwards repeated in the girls’ ward, for the benefit of those too ill to leave their beds. We needhardly say that a supper and all that could be desired in the eating way was not the least part of the evening’s enjoyment.

The expenses of these entertainments were defrayed by the founders of the institution and a few friends.

The East London Hospital For Children And Dispensary For Women was founded in a converted warehouse at Ratcliff Cross in 1868, and originally known as the Shadwell Hospital for Women and Children. It was established by Dr Nathaniel and Mrs Sarah Heckford as a result of their experiences in Wapping during the 1866 Cholera outbreak. In 1875 the Hospital moved to a new building in Shadwell, helped by Charles Dickens raising funds by publishing two articles about the Hospital. In 1930 it had 136 beds. Its name was changed in 1932 to the Princess Elizabeth of York Hospital for Children.

AIM25 (Archives in London/M25 Area) page for the hospital