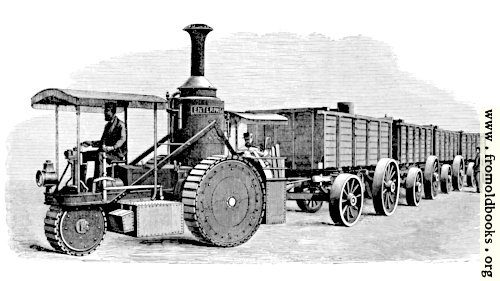 I’m guessing that this didn’t catch on very much because of reliability problems with the plates rusting of breaking off, and because of the invention of the leaf spring for suspension.

The use of steam-power to draw heavy loads upon the ordinary roads, or upon rough ground with no properly made road at all, has long been thought one of the most important of mechanical problems, whether for purposes of commercial traffic or of military movement. The great difficulty has been, on the one hand, to prevent the engine being shaken and damaged by the road, with its natural inequalities of surface, its hard stones and its soft mud; on the other hand, to prevent the road being destroyed by the weight of the engine. The invention of Mr R. W. Thomson. civil engineer, of Moray-place, Edinburgh, who provides the engine wheels with indiarubber tires of great thickness, protected by flexible shields of open steel bars, is considered likely to get rid of this difficulty. The soft and elastic material of the tires, which have been compared to the feet of an elephant, saves the machinery from concussion, and allows the engine to roll smoothly over any sort of ground, as if upon a tramway of indiarubber, climbing the steepest ascents that are practicable for any wheeled carriage. Our Illustration shows one of these engines drawing a train of loaded coal waggons. They are constantly employed between the docks and railways at Leith; and have often run through the streets of Edinburgh with omnibuses, at a speed of eight miles an hour, which they have done likewise in the streets of Paris. One of them, from May to December, last year made seven hundred journeys [.] (p. 303)