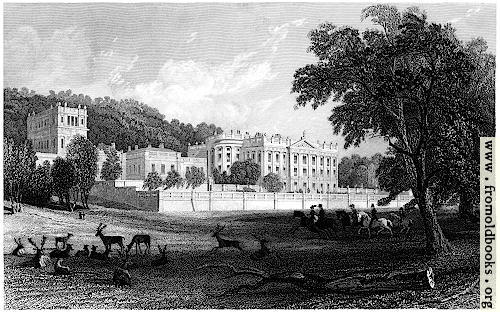 The engraving, based on a picture by Thomas Allom, shows in the foreground deer and people on horseback under large tree, but the view is dominated by the massiveness of the house itself.

It is still owned, and inhabited, by the same family: the Duke and Duchess of Devonshire.

The picture is also signed ‘J Saddler’ which I have taken to be John Saddler.

Seat of the Duke of Devonshire

“And Derwent with his mineral-cradles waves

The feet of Chatsworth laves;

And then as doth beseem,

His ampler waters, listening to the theme

Of Cavendish’s praise on either shore.”

The Chatsworth estate belonged, in the sixteenth century, to Elizabeth, co-heiress of John Hardwick, of Hardwick in the county of Derby. This accomplished and high-minded lady became first the consort of Sir William Cavendish, but, on his death, of the Earl of Shrewsbury. To her prudence, and commanding abilities, however, are justly attributed the wealth and elevated rank which the illustrious descendants of her offspring by her first marriage have since continued to enjoy. Her personal talents, her varied acquirements, were of the highest order; she rebuilt the now venerable pile of Hardwick Hall, and raised at Chatsworth a stately palace, which continued to be the chief residence of the Cavendishes until the commencement of the last century. Here Hobbes, the philosopher, found a retreat from the vanities of life, and here, cherished by his Mecænas, Lord Devonshire, he composed that treatise which has, at least, caused him to be had in remembrance.—Indeed, his practice is rather at variance with his precepts, for instead of discovering any instinctive hostility to his patron, he exhibited a warm sentiment of gratitude towards him, and, in a Latin poem, “De Mirabilibus Pecci,” celebrates the praises of the foundress of the family’s fortunes.

But splendid and replete with historical recollections as was this noble building, it gave place, at the close of the seventeenth century, to the more extensive and more classical structure which still occupies the same site, and was completed by the first Duke of Devonshire in the year 1708, sixteen years from its commencement. The mansion stands at the foot of a bold and lofty hill, clothed with wood, that forms a grand and picturesque object along the sloping side of the Derwent valley, while the opposite bank presents a contrast of sterility the most hopeless, its waste lands extending away to the wilderness of the High Peak of Derbyshire.

The mansion, “a miracle of art amidst the wonders of nature,” is a sumptuous specimen of the Ionic order, of which it constitutes a perfect and enriched model; it was therefore the decision of pure taste and sound judgment that led the present noble proprietor, when he desired more enlarged accommodations for his guests and their retinues, to erect a detached building for the purpose, rather than violate the majestic unity of the original design of Talman and Wren. This spacious hospitium, built from the design of Sir Jeflrey Wyatville, is connected with the mansion by a range of galleries, and is capable of lodging several hundred persons. The extent of the whole façade, including the designs of Wren and Wyatville, is 557 feet.

The grand building, the original palace, forms a square of nearly two hundred feet, the principal front being turned towards the west, and extending along a terrace, that faces the Derwent, with a most imposing and dignified aspect. A handsome stone bridge of three arches, and adorned with statues by Cibber, spans the Derwent in its progress through the domain; and many beautiful examples of sculpture, by the same hand, lend their graces to the quadrangular court between the old and new constructions. The interior is also enriched by the beautiful carvings of Gibbon, of whom Walpole writes, “he gave to wood the loose and airy lightness of flowers, and chained together the various productions of the elements, with a free disorder natural to each species.” The talents of Verrio, Laguerre, Ricard, and Thornhill, were employed in painting ceilings, and staircases, and galleries.

The decorations and embellishments of the interior are proportioned to the magnitude and splendour of the architectural design; works of the ancient masters in painting, and of the most eminent in sculpture, adorn the chief apartments, while the contents of the library are rare and extensive. The appendages to this palace of the Cavendishes are more remarkable for costliness, magnitude, and taste also, than those of any other family-seat in England. Amongst these accessions to style, splendour, and completeness, the grand conservatory is the most remarkable object. It extends 300 feet in length by 145 in breadth, has a height to the central coved roof of 67 feet, and covers an area of one acre. A gallery encircles the great dome; a carriage-way passes down the centre of the building; water, hot and cold, is supplied by tubes that measure a length of six miles; the sash bars, if laid in continuation, would extend forty miles, and the glass which they now enclose amounts to 70,000 square feet. Eight acres around this wonder of art are laid out in pleasure grounds, and twelve dedicated to the production of fruits and vegetables.

This noble mansion was honoured, in the month of December, 1843, by the visit of Queen Victoria and Prince Albert; and the splendour of their reception was in all respects worthy of the rank, fortune and loyalty of the illustrious representative of this ancient family.

Remarkable events connected with the seat of Chatsworth would form a narrative of much interest, from its first foundation to the royal sojourn there in 1843. Here Mary Queen of Scots resided for some years, under the vigilant care of the Earl and Countess of Shrewsbury; and a suite of apartments in the present mansion, occupying the site of her state-prison, is still distinguished amongst the household by her name. The old Hall was garrisoned for the parliament, by Sir John Gell, in 1643, but capitulated to the Earl of Newcastle, who placed a force there to hold it for King Charles, under the command of Colonel Eyre. In 1646 Gell returned with 400 parliamentarians, and laid siege to his old quarters; but Eyre’s obstinacy compelled him to abandon his project, and, after fourteen days spent in fruitless efforts, to return to Derby. The ancient house was taken down in 1687; it was in the new building, therefore, and while yet unfinished, that Marshal Tallard, the French general, who was made prisoner at the battle of Blenheim, was sent to reside, on his parole, in the year 1704. (pp. 10 – 12)