The baron’s Hall at Christmas.details 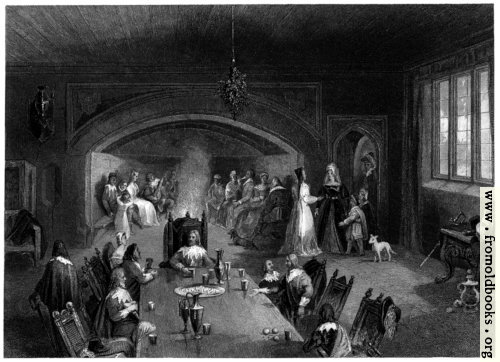 The baron’s Hall at Christmas. more

The baron’s Hall at Christmas.

We see the inside of a medieval banquet hall, probably (by the size of the windows) from the 16th Century or modified at that time. It is Christmas, and various people are enjoying the hospitality of their feudal lord.

The picture was drawn by Henry Melville and engraved by E. Smith, whom I’ve taken to be the London-based Edward Smith.

“We shall gather every evening beside the ancient hearth,

But one vacant place beside it, would darken all its mirth

At any time but Christmas we give you leave to roam,

But now come back, my brother, you are so missed at home.” L.E.L.

Christmas Day was long considered by Christian Europe both as a holy commemoration and a cheerful festival; and it was accordingly marked by devotion, by merriment, by hospitality. In the great dining-hall of the feudal lord, the height of the daïs was forgotten, the great salt-cellar, the boundary of rank, was removed, while the massive walls resounded with the tumultuous joys of serfs and of servants; and the gambols they played were a source of mirth and gratification to the lord and his family, who, by encouraging every art conducive to amusement, alleviated the rigours of the season, and mitigated the cold aspect of the winter.

At a period nearer to the reserved and formal customs of the nineteenth century, these goodly practices had not entirely evaporated. When Queen Anne held the sceptre of these islands, the old English gentleman still observed the old English habits: “he never played cards but at Christmas, when the family pack was taken from the mantel-piece; his chief drink, the year round, was generally ale, except at this season, when he would make a bowl of strong brandy-punch garnished with a toast and nutmeg. In the corner of his hall, by the fireside, stood a large wooden two-arm chair, with a cushion, and within the chimney corner were a couple of seats. Here, at Christmas, he entertained his tenants, assembled round a glowing fire, made of the roots of trees, and other large tough logs, and told, and heard, the traditionary tales of the village, touching ghosts and witches, till fear made them unwilling to depart. In the mean time the jorum of ale was in continual circulation.” This is but an humble picture of the festivity of Christmas in the days of old—those days when the Baronial Hall of Wycoller (the original of the accompanying illustration) was occupied—when its proud owner ruled, with almost absolute power, over the half-cultivated territory around it, the inhabitants of which he looked upon as his immediate charge, his very family.

This venerable relic of the olden time is yet tolerably perfect, and, at the end of the great hall is a deep arched recess, projecting exteriorly beyond the side-wall of the building, after the fashion of domestic architecture in Henry VI.’s reign, having stone benches all round, except where the dogs for detaining the wood fire lay. Piers Hartley was its hospitable owner in the twenty-second year of the seventh Henry’s reign, and his only daughter marrying one of the Cunliffes of Hollins and Billington, the manor passed to that ancient Saxon family. Adam Cunliffe, having mortgaged their manor of Cunliffe-Hill in Billington, to Walmesley, in the reign of Henry VIII.; in that of Elizabeth, the whole property was lost to his family. Hollins was still left, and, removing thither his state and household, he continued to occupy it until the Protectorate. “In consequence of the apostasy and opposition of John Cunlitfe to the government of the commonwealth,” the fierce and sanguinary hypocrites who served the Protector were permitted to plunder Hollins Hall, which had also been sequestered. Wycoller now was his only asylum, and shutting himself within its massive walls, he died regretting the humiliation of his country. Elizabeth, the last of the Cunliffes, married Samuel Scarsgill of Sheffield; and Henry Owen, her grandson, assuming the name and arms of the original proprietors, succeeded to the inheritance of Wycoller, which he enjoyed until his death in November 1818 when it passed to the present branch.

The following passage, extracted from a MS. in the possession of the Cunliffes, fully justifies the character for hospitality which history has arrogated for our ancestors. “At Wycoller Hall, the family usually kept open house the twelve days at Christmas, Their entertainment was, a large hall of curious ashlar work, a long table, plenty of furmenty like new milk, in a morning, made of husked wheat, boiled and roast beef, with a fat goose, and a pudding, and plenty of good beer, for dinner. A round-about fire-place surrounded with stone benches, where the young folks sat and cracked nuts, and diverted themselves; and in this manner, the sons and daughters got matching without going much from home.”

Every Christian understands the true origin of the feast of Christmas; but there are many superstitious rites and traditionary customs interwoven with its observance in the British Isles, which, if time had not hallowed the cold formality of this age would have rejected. One of the most ancient is the decoration of our houses and our churches with evergreens, evidently a heathen practice. “Houses were decked with evergreens in December, that the sylvan spirits might repair to them, and remain unnipped by frost and wind, until a milder season had renewed the foliage of their darling abode.”

Yule-tide, the winter solstice, was the most respected festival of the Druids. At that time they cut from the trees, with their celts, or upright hatchets of brass, all-heal, or misletoe, which the priests laid on their rude stone altars, as an emblem of the salutiferous advent of a Messiah. This custom prevailed for several centuries in the north of England; and on Christmas-eve “they carried misletoe to the high altar of York Minster, and proclaimed public and universal liberty, pardon and freedom to all sorts of inferior and even wicked people, at the gates of the city, towards the four quarters of the heavens.”

The misletoe has been refused admittance into Christian temples; but holly and ivy still hold a mastery there at this joyous season of the year. A much nicer distinction still was observed in their positions by the ancients, than we of the nineteenth century appear to respect—

Let holly have the mastery, as the manner is.

Holly, stand in the hall, fair to behold—

Ivy, stand without the door—she is full sore acold.”

There was a complete similarity in the banquets at the tables of the great during Christmas; and it was so accurate, that poets have been enabled to record, in rhythm, the common bill of fare.

Crested with bays and rosemary.

While round the merry wassail bowl,

Garnished with ribbons, blithe did trowl;

Then the huge sirloin reek’d: hard by

A soused boar’s head was the first dish brought into the hall; and it was always laid with much state and solemnity, on the principal table. This ceremony continued to be observed at the Inner Temple, London, long after other public bodies had abandoned it. “The gentlemen of the Inn went to church; and after the service, they did then presently repair into the hall, to breakfast with brawn, mustard, and malmsey. At the first course at dinner, was served in, a large and fair boar’s head upon a silver platter, with minstrelsy.” The scenes of Christmas hospitality of the olden time are but imperfectly imitated, the noble apartments, in which they were enacted, having fulfilled their destiny. Social relations have undergone so great a change, that no theatre remains for the display of such liberality, even if the chief actors could be found. Few can revert to the history of those days which

To vassal, tenant, serf, and all”—

without sentiments of admiration at the generosity of the host, and at the romantic character of the bonds that united the assembled clan to each other; but none, probably, can seriously desire the revival of institutions, of which those who partook were, the one class, tyrants—the other, slaves. (pp. 12 – 15)