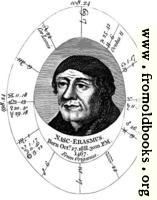 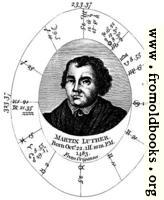 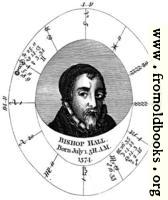 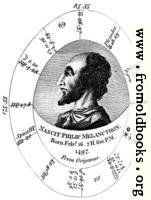 
Melancthon taught philosophy at Wittenberg University in the 16th century; he was a contemporary of Martin Luther, and in fact taught him the Greek language. He was one of the leaders of the early Protestant movement. [more...] [$] 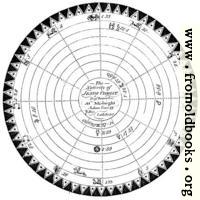 
This engraved drawing of the Nativity, that is, of the birth of Jesus Christ, appears beneath the atrological star chart for Jesus. The nativity scene shows Mary and Joseph, with the new-born baby boy naked in Mary’s lap. Three “wise man” are offering gifts, one kneeling, one sitting and one prostrating himself. The famous star is shining a beam of light onto the boy. There is straw on the floor, and a barred window, but the wall is open, presumably as an artistic device, and [...] [more...] [$] 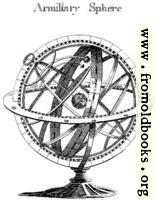 
“I have subjoined a plate of the Armillary Sphere, which is an artificial contrivance, representing the several circles proper to the theory of the mundane world, put togeher in their natural order, to ease and assist the imagination in conceiving the constitution of the spheres, and the various phenomena of the celestial bodies. For this purpose the Earth is placed at the center, pierced by a line supposed to be its axis, the upper point of which is fixed in [...] [more...] [$] 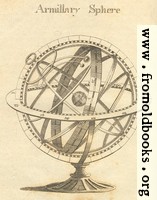 
I scanned the Armillary Sphere again (oops), and this time decided to publish the illustration moer or less as it came off the scanner, as a picture from an old book. [more...] [$] 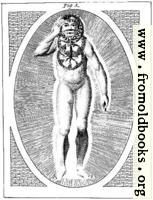 A View of Man in his Primeval State as invested With power by his Creator to rule & Govern gross Elements (Fig. 1 of 2)


“Such was the prime-eval happy state of Man. But departing from his innocency, by the secret insinuations infused into his mind by the fallen spirit Satan, he lusted after palpability in the flesh, turned his face to the elements, deserted [...] state into all the perils of mortaility and death. Having no longer all powers under his subjection, he became subject to sidereal and elementary influx, with his understanding darkened, and his mental faculties abridged; which I have exhibited by the four figures in the annexed plate. [more...] [$]

A View of Man in his Primeval State as invested With power by his Creator to rule & Govern gross Elements (Fig. 2 of 2)


“The second figure shews the elementary and astral influence in the prime-eval state of man, as having no action whatever internally, but falling on his exterior or back parts; whilst his face, turned to the light, received the beautific vision of [...] [more...] [$] 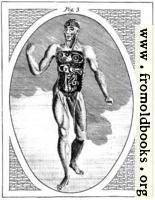 The Lapsed State of Man when contaminated by Lucifer, & under the Dominion of Sidereal & Elementary Influx (1 of 2)


“The third figure shews the internal action of the elementary and planetary influx after the fall, upon the vital parts of man, whence diseases and death follow in a direct and regular course. For, as action of the stars on man are agents, and the elements of which he is composed patients, the same as in the outward world; so we find, as they are situated [...] [more...] [$] 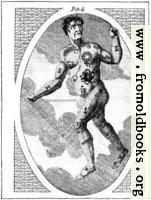 The Lapsed State of Man when contaminated by Lucifer, & under the Dominion of Sidereal & Elementary Influx (2 of 2)


“The fourth figure is intended to shew a faint resemblance of an abandoned and more degenerated state of fallen human nature, when the will and passions of man are given up to vice, and contaminated with the gross or bestial quality of deadly sin and wickedness. He is led captive by an evil spirit, the agent of Lucifer, having his will darkened, and every spark of light extinguished, that could flow from the intellectual faculties of the soul, or from the collision of virtue and sense. Such are the men described by St. Paul in his Epistle to the [...] [more...] [$]