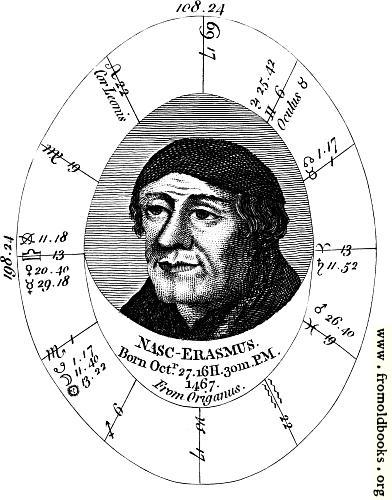 NASC-ERASMUS, of Rotterdam, in Holland. Elevation of the Pole, 54°.

In this nativity we find mercury and Venus posited in the ascendant; a proof of volubility and freedom of speech; and being also in an airy sign, beheld by a benefic trine of Jupiter from the ninth house, declares the native to be a person of strong natural parts, and rich mental endowments.

The learned Cardan has shewn, that the reason why this native abandoned his own country, and undertook so many complex journeys, was because the luminaries were in the dignities of Mars, with the lord of the ninth in the ascendant, in the conjunction of the lady thereof, in a moveable sign. The same ingenious author further observes, that, while the mid-heaven was under the direction of the sextile rays of Venus, the native enjoyed times of happiness and rest. This was most completely felt about the thirty-fourth year of his age, but its continuance was short. His fifty-sixth year proved a most dangerous and unsuccessful one to him, for he then laboured under the baneful opposition of the Moon to Jupiter, stimulated by the quartile irradiation of Mars. He died in the seventieth year of his age.” (p. 889)

This is an astrological chart, with various astrological symbols arranged around a portrait of Desiderious Erasmus of Rotterdam (Roterodamus), who may in fact have been born in 1466 rather than 1467, and who is today famous for his writing and for his Greek and Latin editions of the New Testament. Ironically, Erasmus wrote on freedom of will, and was also a part of the Protestant movement.