A View of Man in his Primeval State as invested With power by his Creator to rule & Govern gross Elements (Fig. 1 of 2)details 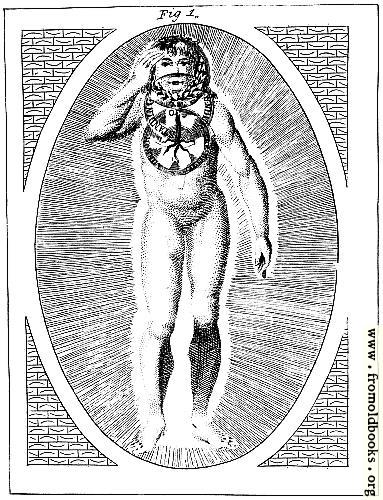 A View of Man in his Primeval State as invested With power by his Creator to rule & Govern gross Elements (Fig. 1 of 2) more

A View of Man in his Primeval State as invested With power by his Creator to rule & Govern gross Elements (Fig. 1 of 2)

Such was the prime-eval happy state of Man. But departing from his innocency, by the secret insinuations infused into his mind by the fallen spirit Satan, he lusted after palpability in the flesh, turned his face to the elements, deserted his readon and his God, and fell from his ethereal state into all the perils of mortaility and death. Having no longer all powers under his subjection, he became subject to sidereal and elementary influx, with his understanding darkened, and his mental faculties abridged; which I have exhibited by the four figures in the annexed plate.

The first represents the primeval state of man, with his hand lifted up to his head, denoting the seat of comprehensive sensibility, to which the light of reason and sense flowed from the mirror of the Deity, in whose image he was formed.” (p. 1060)

The image here is the top left of four, and is marked Fig. 1.; it shows the front view of a naked man with obscured genitalia. He radiates light, and around his face is a laurel-wreath. Words in two circles in front of his neck and chest say “of understanding the deity mirror.”