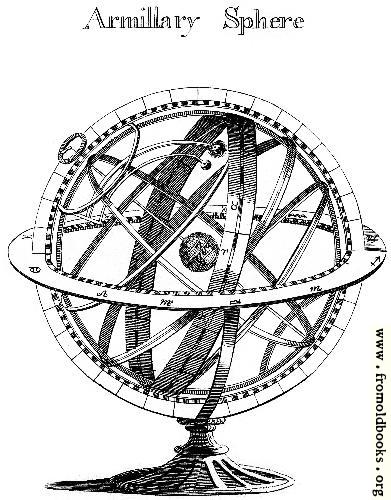 I have subjoined a plate of the Armillary Sphere, which is an artificial contrivance, representing the several circles proper to the theory of the mundane world, put togeher in their natural order, to ease and assist the imagination in conceiving the constitution of the spheres, and the various phenomena of the celestial bodies. For this purpose the Earth is placed at the center, pierced by a line supposed to be its axis, the upper point of which is fixed in the arctic or north pole, and the lower extremity in the antarctic or south pole; whence the two small cirles described near these points are called the arctic and antarctic circles. [...]” (p. 965)

The description continues at length, but any description that starts out with the earth at the centre of the solar system is bound to encounter difficulties.