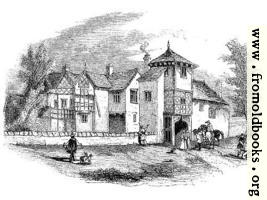 Hulme Hall, Lancashire (Fig. 1672), may be looked on as a fair specimen of the very numerous timber-houses that form so conspicuous a class in the domestic architecture of Elizabeth’s time. And most picturesque buildings they were, with their gable roofs, and numerous projections, their carvings and their pinnacles. Hulme Hall no longer exists. It was pulled clown a short time since. Our engraving was taken just before its demolition. The place belonged to the family of Prestwick from the middle of the fifteenth to about the middle of the seventeenth century. A curious mystery may be said still to attach to the spot. The dowager Lady Prestwick, during the Civil War, encouraged her son, who belonged to the Royal party—but apparently had been wavering in his allegiance on account of pecuniary difficulties— to remain firm to the Royalist cause, saying she had treasure to supply him with. It was supposed she referred to some hidden stores about Hulme. But when she was dying she was speechless, and so, if she had a secret of the nature supposed, it was buried with her. Nothing remarkable has since been discovered at Hulme.