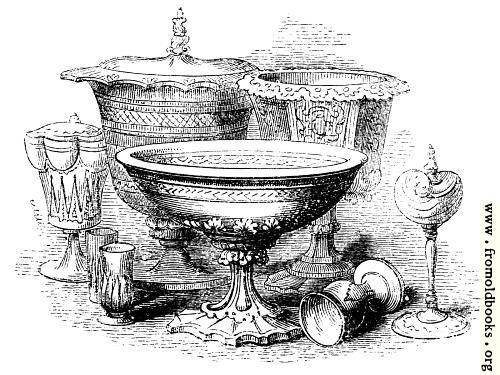 Thus Anne Bullen [Anne Boleyn] was at last Queen of England, and Katherine deposed. At first all things smiled upon the beautiful and light-hearted woman who now presided over the domestic arrangements of the court. A dughter—Elizabeth—was born; and loud and long were the congratulations, magnificent the feastings and processions of the christening (Fig. 1425). But ere three years had passed, the poisoned chalice that Anne had been instrumental in offering to the late queen, was commended to her own lips, under circunstances a thousand times more terrible. Katherine died in the beginning of 1536, and wihin six months after, Queen Anne Bullen, who in the pride of her heart had said, on hearing of Katherine’s death, “she was now indeed a queen,” discovered that, as she had supplanted her royal mistress, so she was about to be supplanted by one of her maids of honour. It is said that the premature birth of a son was brought on by discovering some unseemly familiarity between Henry and Lady Jane Seymour; and the death of that son in consequence completed her ruin. (p. 23)

The gifts include cups and chalices; the one in the centre of the woodcut appears to be large enough to use as a wassailing bowl!