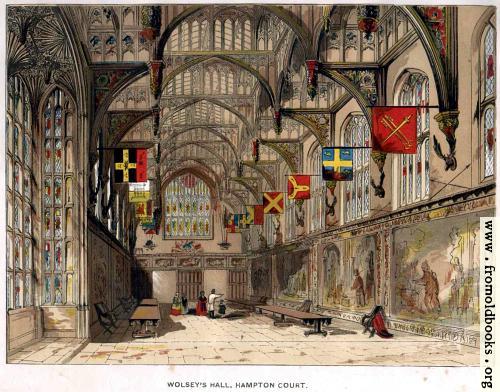 In 1514, in the parish of Hampton, Thomas Wolsey, Archbishop of York began building a magnificent palace on the north bank of the River Thames... Tudor Histor Web page.

“The passage to Wolsey’s Hall is by a flight of stone steps, above which is a richly-groined ceiling, with the carving still quite [i.e. perfectly] sharp, though three hundred years have passed away [in 1845] since it was executed. The entrance to the hall is at the west end, beneath the minstrels’ gallery, which, projecting under the west window, casts a comparative gloom over the approach, and, when the hall is first seen, produces an effect of light and splendour almost startling. The hall is one hundred and six feet long, forty feet wide, and sixty feet high. The roof is supported by a carved timber framework, which stretches across the wide and lofty room in a series of magnificent arches, each central arch springing from two pendents, suspended from the points of two arches which spring on each side from brackets between the windows. Carved timber resembling the framework of Gothic windows with their tracery, filles up the space between the arches and the ceiling. The carving is exceedingly rich, and the whole is painted and finished off in burnished gold. The hall is lighted by six Gothic windows high above the floor on each side, a great window at the west end, another at the east end, seen over the top of the screen which separates the hall from the withdrawing-room, and a beautiful oriel window on the south side, which, reaching almost from the floor to the roof, pours its abundant light on the dais, or raised portion of the pavement at the upper end appropriated to the most distinguished persons. The canopy of the oriel window, consisting of pendents of carved stone, is of singular beauty. The east and west windows and the oriel are decorated with stained glass executed by Mr. Willement. The walls on each side of the hall are hung with arras tapestry, consisting of eight pictures, each of which represents one of the prinicpal events of the life of the patriarch Abraham. The whole series includes ten pieces; the other two are in the public dining-room at Hampton Court Palace. The tapestry belonged to Henry VIII., and has descended to the present times as a portion of the royal wardrobes. It is not known by whom the designs were made, but they have been ascribed, with some degree of probability, to Bernard von Oraly, of Brussels, who went to Rome when he was young, and became a pupil of Raphael. He afterwards returned to Brussels, and is known to have made other designs for tapestry. The tapestry beneath the minstrels’ gallery is of still earlier workmanship. There are various other appropriate decorations in Wolsey’s Hall, which for the brilliancy and gorgeousness of effect is probably unrivalled in Europe or in the world.” [vol II p. iii]