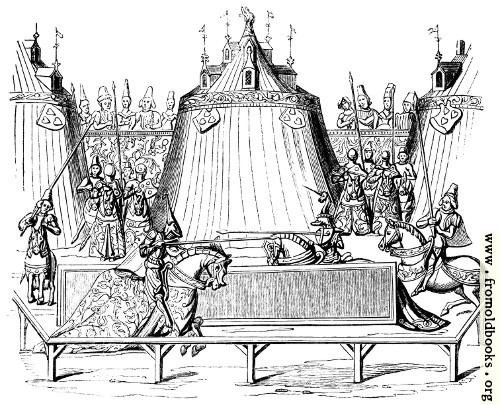 This wood engraving shows two knights on their horses, charging towards one another with their lances pointed. In the background are great tents or marquees and a watching audience. The heraldic arms of the knights are on their respective tents.

The picture of the jousting tournament is from Harley Manuscript 4379 at the British Library, the “Chronicles” by Jean Froissart, made in around 1470. The original is brightly coloured.

Jousting Tournament from the Harley Froissart

A new epoch in Windsor would have opened with the reign of Edward IV., if that monarch, so cruel and brave in war, so gay and affable in peace, could have accomplished what he wished. During the few happy years that relieved his tempestuous career, he laboured hard to restore the declining genius of chivalry; but well as he was fitted for the task, it was too difficult even for him, though assisted by the general desire of the nation, and by the stimulus given by the first printed books—the chivalric romances—of the Caxton press. Firearms were also fast dissipating the prestige attached to knightly skill; commerce and literature were opening new and boundless fields for the energies that had been wasted hitherto on war. A more enlightened religious faith was introducing new refinements and enhancing the value of life; and, in short, chivalry was already as a lamp of the night, whose beams grew wan and useless in the radiance of the opening day of knowledge.

Finding that neither authoritative edicts, brilliant example, nor liberal encouragement could bring back the old ardour, Edward IV. was fain to solace himself with the shows instead of the substance of chivalry; and even in them was no less strikingly exhibited the growing spirit of the time. The tournaments, for instance, of the fifteenth century (Figs. 1254, 1255), provided with such care for the protection of the combatants, that the chief object of the sport, the development of martial bravery, was lost; and the fire of emulation burned so low in the breasts of the chief knights of the time, that they were content to have the number of blows that should be struck, reduced to as mechanical a precision as any of the commonest arrangements of the tilt-yard. The shock of the war-horses, that had formed one of the leading perils of the encounter, was prevented by a double barrier of partitions dividing the hostile parties, and stretching across the area of the lists; whilst the thrust of the lance and the sword was also rendered harmless enough by the points being blunted. (Sir Walter Scott.) (p. 359)