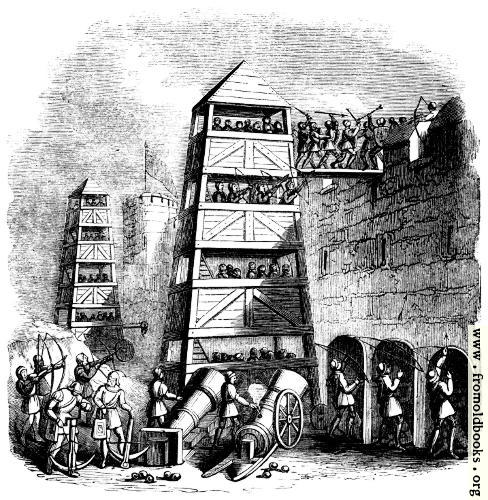 A few words by way of appendage to this part of our subject may here be devoted to the subject of our engravings, representing the storming of a fort (Fig. 1251), the siege of a town (Fig. 1252), and the chief machines used on such occasions, namely, the breaching and the moveable towers (Figs. 1253 and 1274). Cannon we see were now in constant use. The art of attacking fortified places was greatly advanced by the English during the period under review [1389 – 1485], as the French found to their cost when Henry V. was among them. Every town that he attacked he took; a fact that forms a striking contrast to the state of things but a few years before, when, for instance, Edward III. was kept for a whole twelvemonth before Calais, wasting his resources and losing his temper.

Henry’s engineers, it appears, drew their lines of contravallation and circumvallation, approached by entrenchments, ran their secret mine through the bowels of the earth, battered the walls with rams as well as artillery, showered darts, stones and bullets over the ramparts and their defenders. As a specimen of one of the fortresses built in the fifteenth century, consisting essentially of a mere tower, or keep, mounted with extensive fortifications, therefore evidently intended for defence, and not for accommodation, we may refer to Bothwick Castle, in Scotland (Fig. 1273). (p. 382)

Here we see the moveable tower, or siege tower, on wheels, arrived at the castle walls or battlements; a bridge of planks from the tower to the castle walls is the scene of a fierce battle with crossbow-men, archers and cannons on both sides.