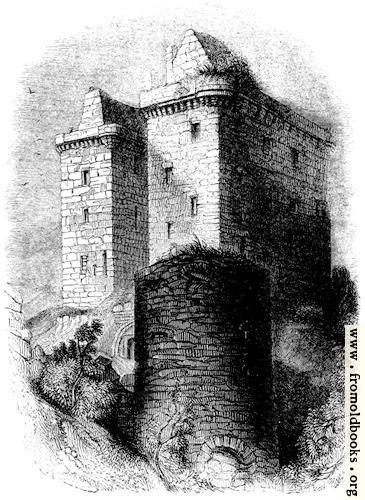 Bortwick castle was built in the 1430s; it is inhabited (now as a hotel) and is in good condition, despite the grass growing on the battlements in this 1840s engraving. It capitulated to Cromwell in 1650 and hence avoided being slighted.

As a specimen of one of the fortresses built in the fifteenth century, consisting essentially of a mere tower, or keep, mounted with extensive fortifications, therefore evidently intended for defence, and not for accommodation, we may refer to Borthwick Castle, in Scotland (Fig. 1273), erected about 1430, an edifice well known sa having been frequently visited by Mary, Queen of Scots, an honour which it owed to its proximity to the castle of Crichton, the property of Bothwell. Sir Walter Scott tells a good story of the nobleman to whom Borthwick then belonged. In consequence of a process betweixt Master George Hay de Min­zeans and the Lord Borthwick (in 1547), letters of excommunication had passed against the latter, on account of the contumacy of certain witnesses. William Langlands, an apparitor or macer of the see of St. Andrews, presented these letters to the curate of the church of Borthwick, requiring him to publish the same at the service of high mass. It seems that the inhabitants of the castle were at this time engaged in the favourite sport of enacting the Abbot of Unreason, a species of high jinks, in which a mimic prelate was elected, who, like the Lord of Misrule in England, turned all sort of lawful authority, and particularly the church ritual, into ridicule. This frolicksome person with his retinue, notwithstanding the apparitor’s character, entered the church, seized upon the primate’s officer without hesitation, and dragging him to the mill-dam on the south side of the castle, compelled him to leap into the water. Not contented with this partial immersion, the Abbot of Unreason pronounced that Mr. William Langlands was not yet sufficiently bathed, and therefore caused his assistants to lay him on his back in the stream, and duck him in the most satisfactory and perfect manner. The unfortunate apparitor was then conducted back to the church, where, for his refreshment after his bath, the letters of excommuni­cation were torn to pieces, and steeped in a bowl of wine, the mock abbot probably being of the opinion that a tough parchment was but dry eating. Langlands was compelled to eat the letters and swallow the wine, with the comfortable assurance that if any more such letters should arrive, during the continuance of this office, they should “a’ gang the same gait.” (p. 382)

Today the castle is a hotel.