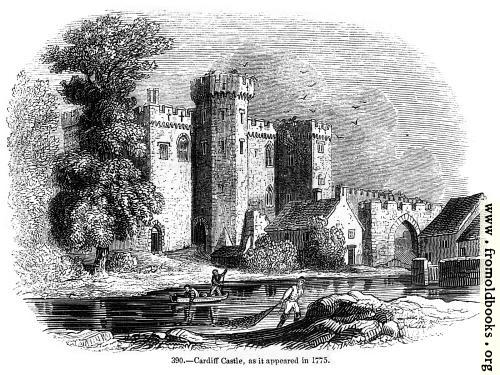 First built around 1090, Cardiff castle was extensively rebuilt in the 19th Century.

Fortunate was it for the country when a prince arose of such decided character as Henry I.; for he crushed the lesser oppressors, whose evil doings were more constant and universal. It mattered little to the welfare of the country that his unhappy brother Robert was shut up for years in Cardiff Castle, if the king visited his own purveyors with terrible punishments when they ground the people by unjust exactions. In Cardiff Castle (Fig. 390) a dark vaulted room beneath the level of the ground is shown as the place where Robert of Normandy was confined by his brother for twenty-six years. The tradition rests upon no historical foundation whatever, nor, indeed, upon any probability. The gallant but heedless prince, according to William of Malmesbury and other chroniclers, was indeed a prisoner in Cardiff Castle, but surrounded with luxury and magnificence, and provided with minstrels and jesters to make his life pass away as a gay dream.

“Matthew Paris tells a curious story, which appears very characteristic of the proud and trifling mind of him whom Beauclerk had jostled out of a throne. “It happened on a feast day, that king Henry trying on a scarlet robe, the hood of which being too strait, in essaying to put it on he tore one of the stitches, whereupon he desired one of his attendants to carry it to his brother, whose head was smaller; it always having been his custom whenever he had a new robe to send one cut off from the same cloth to his brother with a polite message. This garment being delivered to Robert, in putting it on he felt the fraction where the stitch had been broken, and through the negligence of the tailor not mended. On asking how that place came torn, he was told that it was done by his brother, and the whole story was related to him; whereupon, falling into a violent passion, he thus exclaimed: ‘Alas! alas! I have lived too long! Behold my younger brother, a lazy clerk, who has supplanted me in my kingdom, imprisoned and blinded me! I who have been famous in arms! And now, not content with these injuries, he insults me as if I were a beggar, sending me his cast off clothes as for an alms!’ From that time he refused to take any nourishment, and, miserably weeping and lamenting, starved himself to death.

He was buried in Gloucester Cathedral, where his image, as big as the life, was carved in Irish oak and painted, is yet shown.” Death leveled these distinctions in the same year. If Robert died of mortification about a cast off robe, Henry perished more ignobly of a full meal of lampreys. Robert’s effigy of heart of oak was carefully repared by a stranger two centuries ago [i.e. circa 1650]. The monument of Henry, in Reading Abbey, which he founded, perished long since, and scarecely a stone is now left standing of this princely building, to tell the tale of his pious munificence (Fig. 389).” (p. 102)