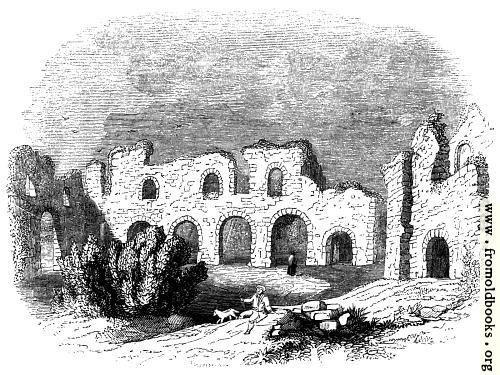 Reading Abbey was founded in 1121 by King Henry I; it became very wealthy, no doubt in part because of the corruption that was endemic to the Roman Catholic Church. At the Dissolution of the Monasteries in 1539 the Abbot refused to accept the authority of the King, and was executed; the property thus passed to the Crown and was used as a royal palace for someyears afterwards. Over the years various parts of the buildings were used to provide materials for other constrution projects.

See Reading Abbey in Grose’s Antiquities for another engraving of this ruined abbey.

See Fig. 390 for an anecdote relating to King Henry I; there was once a monument to him in Reading Abbey.

Reading Museum has a page about the abbey.