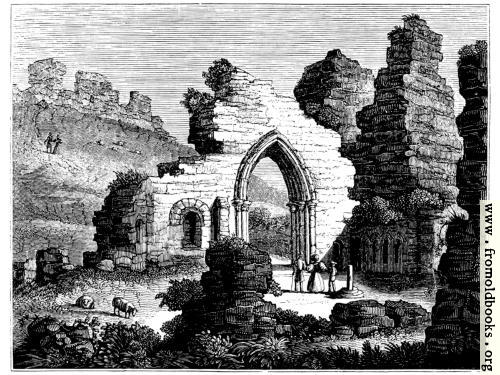 Hastings Castle was built by William the Conqueror in 1070 or so, together with the chapel of St. Mary. Coastal erosion, and, later, French attacks, meant there wasn’t much left by 1400. After the Dissolution of the Monasteries the land became used for farming. It was excavated in the 1820s, and further damaged by bomb in the Second World War. It is now open to the public and run by the town of Hastings.

The ruined walls of the Castle of Hastings, and the remains of the pretty chapel within those walls, are familiar objects to the visitors of the most beautiful of our watering-places. The situation of this Castle is singularly noble. It was here, according to Eadmer, that almost all the bishops and nobles of England were assembled in the year 1090, to pay personal homage to King William II. before his departure for Normandy. Grose has given a pretty accurate description of this castle, which we abridge with slight alteration. What remains of the castle approaches nearest in shape to two sides of an oblique spherical triangle, having the points rounded off. The base, or south side next the sea, completing the triangle, is formed by a perpendicular craggy cliff about four hundred feet in length, upon which are no vestiges of walls or other fortification. The east side is made by a plain wall measuring near three hundred feet, without tower or defence of any kind. The adjoining side, which faces the north-west, is about four hundred feet long. The area included is about an acre and one-fifth. The walls, nowhere entire, are about eight feet thick. The gateway, now demolished, was on the north side, near the northernmost angle. Not far from it, to the west, are the remains of a small tower enclosing a circular flight of stairs; and still farther westward, a sally-port and the ruins of another tower. On the east side, at the distance of about one hundred feet, ran a ditch, one hundred feet in breadth at the top, and sixty feet deep; but both the ditch, and the interval between it and the wall, seem to have gradually narrowed as they approached the gate, under which they terminated. On the north-west side there was another ditch of the same breadth, commencing at the cliff opposite to the westernmost angle, and bearing away almost due north, leaving a level intermediate space, which, opposite to the sally-port, was one hundred and eighty feet in breadth (Fig. 381). (p. 99)