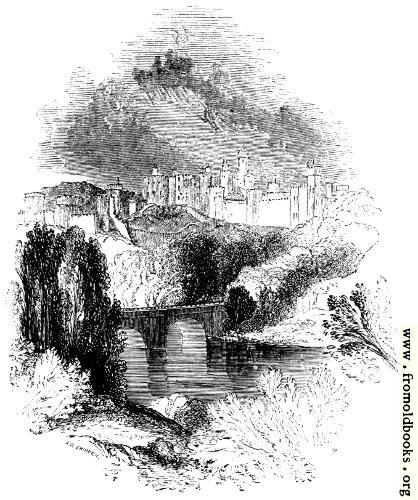 A dramatic view of Alnwick Castle in a storm, with its towers, castle walls and battlements standing high on the hillside. The wood engraving is signed J. W. Whimper; this is the same person as J. W. Whymper. Josiah Wood Whymper was a painter, wood engraver and etcher, and used both Whymper and Whimper for his name. One of his sons, , is also represented on this site, but not in this book, which was printed when Edward was four years old.

Alnwick is the county town of Northumberland, the northernmost county of England; the castle has been there for approximately a thousand years, and is still lived in today by the Duke of Northumberland and his family. It was used in the Harry Potter films, and is open to the public in the summer.

[We] here introduce [Alnwick Castle,] the noble seat of the Percies, for it was a place of strength soon after the Norman Conquest. In the reign of Rufus it was besieged by Malcolm the Third, of Scotland, who here lost his life, as did his son Prince Edward. Before the Norman Conquest the castle and barony of Alnwick belonged to Gilbert Tyson, who was slain fighting against the invader, by the side of his Saxon king. The Conqueror gave the granddaughter of Gilbert in marriage to Ivo de Vescy, one of his Norman followers; and the Lords de Vescy enjoyed the fair possessions down to the time of Edward I. (p. 99)