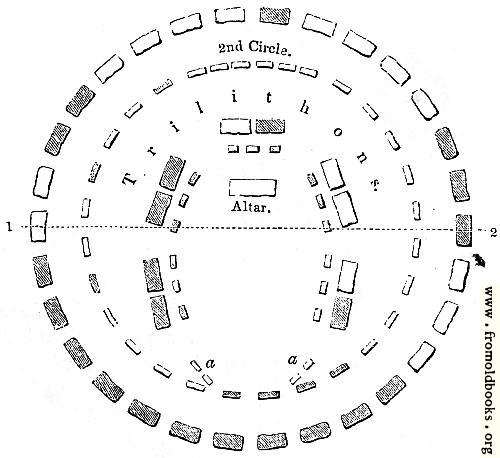 Dr. Stukely’s drawing; the shaded stones were the ones remaining in the early 1840s when this plan was prepared.

The centre of the enclosed space is usually denominated the temple. It consists of an outer circle of stones, seventeen of which remain in their original position; and thirteen to the north-east, forming an uninterrupted segment of the circle, leave no doubt as to the form of the edifice. The restored plan of Dr. Stukeley (Fig. 2) shows the original number of stones in this outer circle to have been thirty; those shadowed on the plan are still remaining. The upright stones of the outer circle are 14 feet in height, and upon the tops of them has been carried throughout a continuous impost, as it is technically called, of large flat stones of the same width. This has not been a rude work, as we see in the structures called cromlechs, where a flat stone covers two or three uprights, without any nice adjustment: but at Stonehenge sufficient remains to show that the horizontal stones carefully fitted each other, so as to form each an arc of the circle; and that they were held firmly in their places by a deep mortice at each end, fitting upon the tenon of the uprights. This careful employment of the builder’s art constitutes one of the remarkable peculiarities of Stonehenge. The blocks themselves are carefully hewn. It is not necessary to add to our wonder by adopting the common notion that the neighbouring country produces no such material. The same fine-grained sandstone of which the greater number of the masses consists, is found scattered upon the downs in the neighbourhood of Marlborough and Avebury. The stones of the second circle are, however, of a different character; and so is what is called the altar-stone, marked f on the ground plan. Of the inner circle, enclosing a diameter of 83 feet, which appears to have consisted of much smaller stones without imposts, but about the same in number as the outer circle, there are very few stones remaining. There is a single fallen stone with two mortices g, which has led to the belief that there was some variation in the plan of the second circle, such as is indicated by the letter a on the restored plan. Within the second circle were five distinct erections, each consisting of two very large stones with an impost, with three smaller stones in advance of each: these have been called trilithons. That marked h in the ground plan is the largest stone in the edifice, being 21 feet 6 inches in height. The two trilithons marked i are nearly perfect. The stones of the trilithon k are entire; but it fell prostrate as recently as 1797. The external appearance which the whole work would have if restored, is shown in the perspective elevation. (Fig. 3.) The internal arrangement is exhibited in the section. (Fig. 4.) The present appearance of the ruin from different points of view is shown in (Fig. 5) and (Fig. 6).” (p. 5)