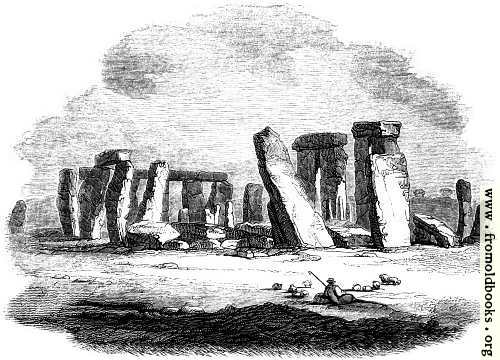 “The description which we have thus given, brief as it is, may appear somewhat tedious; but it is necessary to understand the general plan and some of the details of every great work of art, of whatever age, ruinous or entire, before the mind can properly apply itself to the associations which belong to it. In Stonehenge this course is especially more necessary; for, however the iamgination may be impressed by the magnitude of those masses of stone which still remain in their places, by the grandeur even of the fragments confused or broken in their fall, by the consideration of the vast labour required to bring such ponderous substances to this desolate spot, and by surmise of the nature of the mechanical skill by which they were lifted up and placed in order and proportion, it is not till the entire plan is fully comprehended that we can properly surrender ourselves to the contemplations which belong to this remarkable scene. It is then, when we can figure to ourselves a perfect structure, composed of such huge materials symmetrically arranged, and processing, therefore, that beauty which is the result of symmetry, that we can satisfactorily look back through the dim light of history or tradition to the object for which such a structure was destined. The belief now appears tolerably settled that Stonehenge was a temple of the Druids. It differs, however, from all other Druidical remains, in the circumstance that greater mechanical art was employed in its construction, especially in the super-incumbent stones of the outer circle and of the trilithons, from which it is supposed to derive its name: stan being the Saxon for a stone, and heng to hang or support. From this circumstance it is maintained that Stonehenge is of the very latest ages of Druidism; and that the Druids that wholly belonged to the ante-historic period followed the example of those who observed the command of the law: “If thou wilt make me an altar of stone, thou shalt not build it of hewn stone: for if thou lift up thy tool upon it, thou hast polluted it.” (Exodus, chap. xx.)

“Regarding Stonehenge as a work of masonry and architectural proportions, Inigo Jones came to the conclusion that it was an architect’s dream. Antiquaries, with less of taste and fancy than Inigo Jones, have had their dreams also about Stonehenge, almost as wild as the legend of Merlin flying away with the stones from the Curragh of Kildare. Some attribute its erection to the Britons after the invasion of the Romans. Some bring it down to as recent a period as that of the usurping Danes. Others again carry it back to the early days of the œnicians. The first notice of Stonehenge is found in the writings of Nennius, who lived in the ninth century of the Christian era. He says that at the spot where Stonehenge stands a conferencewas helf between Hengist and Vortigern, at which Hengist treacherously murdered four hundred and sixty British nobles, and that their mourning survivors erected the temple [i.e. Stonehenge] to commemorate the fatal event. Mr. Davies, a modern [1845] writer upon Celtic antiquities, holds that Stonehenge was the place of this conference between the British and Saxon princes, on account of its venerable antiquity and peculiar sanctity. There is a passage in Diodorus Siculus, quoted from Hecatæus, which describes a round temple in Britain dedicated to Apollo; and this Mr. Davies concludes to have been Stonehenge. By another writer, Dr. Smith, Stonehenge is maintained to have been “the grand orrery of the Druids,” representing, by combinations of its stones, the ancient solar year, the lunar month, the twelve signs of the zodiac, and the seven planets.” Lastly, Stoenhenge has been pronounced to be a temple of Budha, the Druids being held to be a race of emigrated Indian philosophers.

Startling as this last assertion may appear to be, a variety of facts irresistibly [sic] lead to the conclusion that the circles, the stones of memorial, the cromlechs, and other monuments of the highest antiquity in these islands, have a distinct resemblance to other monuments of the same character scattered over Asia and Europe, and even found in the New World, which appear to have had a common origin. In Great Britain and Ireland, in Jersey and Guernsey, in France, in Germany, in Denmark and Sweden, such monuments are found extensively dispersed. They are found also, though more rarely, in the Netherlands, Portugal, and Malta; in Gozo and Phœnicia. But their presence is also unquestionable in Malabar,in India, in Palestine, in Persia.” (pp 3, 6)

see the next image for more of this description