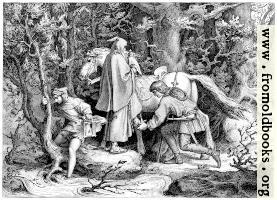 This engraving by Schultheiss is based on an oil painting by Moitz von Schwind, and depicts a scene about Rudolf von Habsburg (1218 – 1291), King of Germany. The story is that Rudolf, when he was still Count of Swabia, met a priest who was carrying the Sacrement for a Mass. Rudolf got off his horse to let the priest ride, out of respect for the Host. In this picture the scene happens in a forest at night; the count’s servant leads the way with a candle in a lantern, bare-legged, and is using a tree for support as he finds his footing in a rapidly-flowing stream. The Count himself is down on one knee bowing as the priest is about to mount.