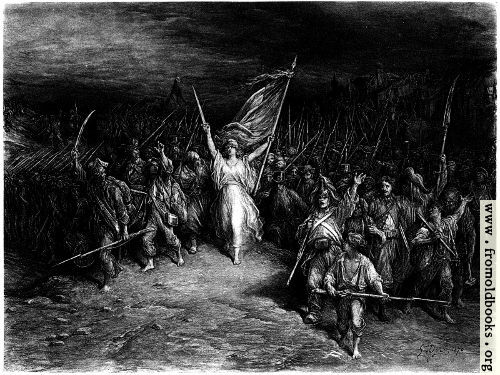 The Marseillaise, in France more

It was at this time [in 1792] that the formidable invasion under the Duke of Brunswick, consisting of 138,000 men, of whom 66,000 were under the King of Prussia in person, and 50,000 were Austrians under Prince Hohenlohe and Marshal Clairfait, marched to France, and menaced Dumouriez, who occupied the defiles of Varennes, with very inferior forces. Against this mighty invasion the French nation rose as one man. Recruits poured to the borderland singing the Marseillaise, their newly adopted national hymn. Rapidly reducing this motley force to order, Kellermann, with 22,000 men, marched from Metz, on September 4th, for Chalons with the utmost celerity, reached Bar before the Prussians, saved the magazines on the upper Saone and Marne, and put himself in a situation to communicate with Dumouriez. (p, 252)

I do not need to reproduce here the Marseillaise; Gustav Doré has produced an engraved illustration that gives the feel of barefoot peasants marching with urgent and nationalistic pride behind a beautiful and strong woman with a makeshift banner or flag. The blood of the matyrs shall water the meadows of France!

The engraving is signed by Doré, and underneath is the legend, Photogravure by Goupil & C°.