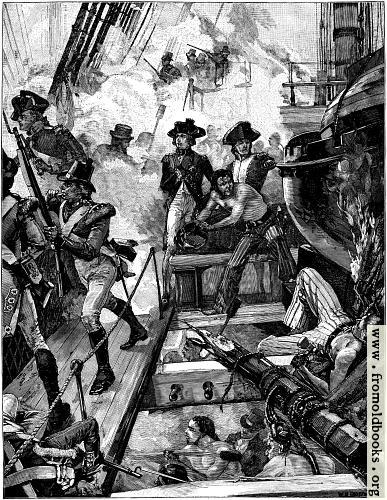 The last battle in which Nelson was engaged was fought off Cape Trafalgar, October 21, 1805. The enemy were superior in number of ships, and still more in size and weight of metal. Nelson bore down on them in two lines, heading one himself, while Collingwood, in the Royal Sovereign, led the other, which first entered into action. “See,” cried Nelson, as the Royal Sovereign cut through the centre of the enemy’s line, and muzzle to muzzle engaged a three-decker, “see how that noble fellow Collingwood carries his ships into action.” Collingwood, on the other hand, said to his captain, “Rotherham, what would Nelson give to be here?” As the Victory approached an incessant raking fire was directed against her, by which fifty of her men were killed and wounded before a single gun was returned. Nelson steered for his old opponent at Cape St. Vincent, the Santissima Trinidad, distinguished by her size, and opened his fire at four minutes after twelve, engaging the Redoubtable with his starboard, the Santissima Trinidad and Bucentaur with his larboard [port] gins.

About a qyarter past one, a musket-ball, fired from the mizzen-top of the Redoubtable, struck him on the left shoulder, and he fell. From the first he felt the wound to be mortal. He suffered intense pain, yet still preserved the livliest interest in the fate of the action [...] He lived to know that his victory was complete and glorious, and expired tranquilly at half-past four. His last words were, “Thank God, I have done my duty.”

He had indeed done his duty, and completed his task; for thenceforth no hostile fleet presumed to contest the dominion of the sea.” (p. 283)

The sketch is signed “W. Overend, Pinxit,” the last word (pinxit, painted) meaning that the artist named is the creator of the original work rather than the engraver.