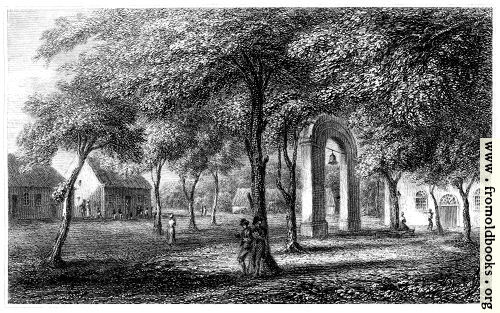 This is probably the village now called Baviaanskloof. We see some buildings and an arch in which a bell hangs.

Gnadenthal, A Hottentot Village
(With an Engraving.)

Gnadenthal lies about one hundred and twenty Enf­lish miles from Capetown [in South Africa], in a direction nearly due east. It is the principal Missionary settlement of the United Brethren in South Africa.

The Mission among the Hottentots was begun in 1737, by George Schmidt, a man of remarkable zeal and courage, who settled at this place, then known by the name of Bavians-Kloof. The Hottentots heard the Gospel with attention, and he soon collecteda small Christian congregation. He taught the youth to read Dutch, and instructed the people in several useful arts. In 1744, leaving them to the care of a pius man, he went to Europe, with a view to represent te promisning state of the Mission, and to return with assistants. But, to his inexpressible grief and disappointment, he was not per­mitted by the Dutch East India Company to resume his labours; some ignorant people having insinuated, that the propagation of Christianity among the Hottentots would injure the interests of the colony. From that time, to the year 1795, the Brethren did not cease to make application to the Dutch Government for leave to send Missionaries to the Cape; especially as they heard that the small Hottentot Congregation had kept together for some time, in earnest expectation of the return of their beloved teacher. M. Schmidt had left a Dutch New Testament with them, which they read together for their edification.

At length, in 1792, by the mercy of God, and the kind interference of friends in the Dutch Government, leave was granted to send out three Missionaries; who, on their arrival, were willing, at the desire of the Governor, to go first to Bavians-Kloof, and there to commence their labours, on the spot where George Schmidt had resided. Instructions from the Government in Holland granted them to choose the place of their residence, wherever they might find it most convenient; but the circumstances of the Colony at that time would not admit of it.

The English having made themselves masters of the colony in 1796, the Brethren were permitted to build a church; and by the favour which the British Government has uniformly shown to the Brethren’s Missions, they now remain undisturbed and protected in their civil and re­ligious liberty.

In 1792, when the three Missionaries, Henry Maraveld, Daniel Schwinn, and John Christian Kuehnel, came hither, they found an old woman, Helena, baptized by M. Schmidt, still alive; who delivered to them the Testament he had given her. But few vestiges of his dwelling remained. The place was a perfect wilderness. At present thirteen hundred Hottentots inhabit the village. The name Gna­denthal was given to it by the Dutch Governor Jansen.

In the year 1816, this interesting place was visited by the Rev. C. J. Latrobe; who gives the following delightful account of it. We spent the first afternoon after our arrival in walking through part of the settlement. Out of every house and hut, men, women, and children, came forth with friendly faces to meet us, and to testify their joy at our arrival. Having observed to some of th inha­bitants who live near the church, that the place before their houses was not kept in good order, and Brother Bo­natz adding, that I was De Heer, of whom he had told them, that he would come from Europe to see them, and expected to find cleanliness and order established through the whole village, they fell to work, and in half an hour removed all the rubbish and ashes lying about their houses; promising that I should never see such dis­order again. We next went into the great garden in the centre of which stands the celebreated pear-tree, planted by the late venerable Missionary, George Schmidt, in 1738. Having in fifty-four years, during the suspension of the Mission, grown to a vast size, it served the Brethren, in 1792, both for church and school, the people and their children sitting under the shade of its wide-spreading branches. The burial-ground lies west of the garden, a double row of oaks sheltering it towards the north. It is divided into four equal compartments, at present compre­hending about three hundred graves of Hottentots, in regular rows, each distinguished by a piece of wood, marked with a number, referring to the church-book.

In the evening, about four hundred Hottentots attended the services of the church, and, after a suitable address by Brother Bonatz, joined in a hymn of praise to God for having brought us safe to this place. When we delivered thesalutations sent by the congregations of the Brethren in Germany and England, to the converts among the Hottentots, with best wishes for an increase of every blessing upon them and their nation, loud thanksgivings followed. To us, new-comers, it was a truly gratifying and affecting sight, to see so large a number of Christian Hottentots assembled together, and to hear them, with heart and voice, joining in the worship of Him, with whom there is no respect of persons, but whose grace and mercy are free to all of every tribe and nation who humbly seek his face.

[taken from the February, 1830 edition of The Youth’s Instructer and Guardian magazine, Vol XIV., No. 158]