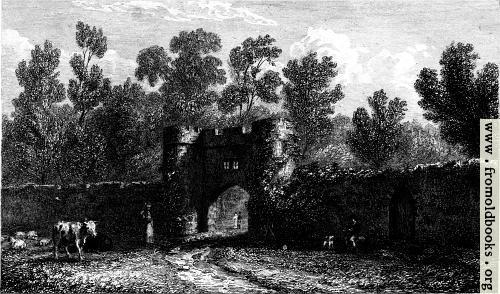 The venerable remains of Farley Castle, the renowned baronial residence of the Hungerfords, is situated about six miles south-east from bath, in the county of Somerset. It is supposed to derive its name from the fairness of its leys, or meadows; being situated in a rich and beautiful tract of country. Farley is of great antiquity, having been in the possession of some of the Saxon Thanes; and it was for many ages distinguished as the seat of men of great power and eminence. At the time of the Norman Conquest [A.D. 1066] it was possessed by one of the Conqueror’s powerful barons, Roger de Curcelle; at whose death, William Rufus granted it to Hugh de Montfort, son to Thurstan de Bastenbergh, another Norman of distinction.” (p. 361)

“In its original state this castle consisted of two courts of wards, which were surrounded by a lofty embattled wall and a moat. The hall was hung round with suits of armour worn by its martial possessors, and with the spoils from the fields of Cressy, Poictiers, Agincourt, and Calais. Of these buildings no perfect part remains.” (p. 363)

Just wanted to say that my last name is Farley and I find this so helpful and interesting! Thank you!!!