Interior of the Temple Church.details 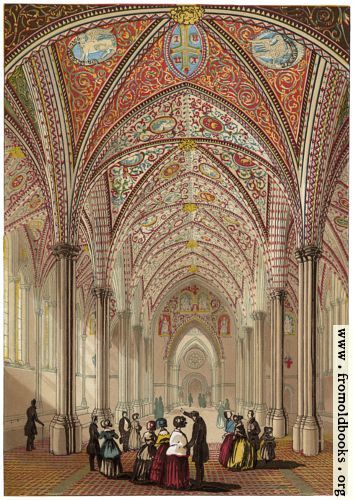 Interior of the Temple Church., in London,London,England more

Interior of the Temple Church.

The Temple Church was built by (or for) the Knights Templar in London in the 12th Century. Some time after the Knights Templar were destroyed (in 1307) the temple was given by Edward II to the Knights Hospitaller, who in turn rented it out to the Inner Temple and Middle Temple, two societies of lawyers, who still hold it today.

At some time since this engraving was made, the ceiling of the church appears to have been whitewashed.

This picture was made from multiple (probably twelve) engraved plates, one for each colour: each copy had to go through the printing press once for each colour, then be set aside until it was dry enough for the next colour. The registration is not perfect, but it’s pretty good for the 1840s!